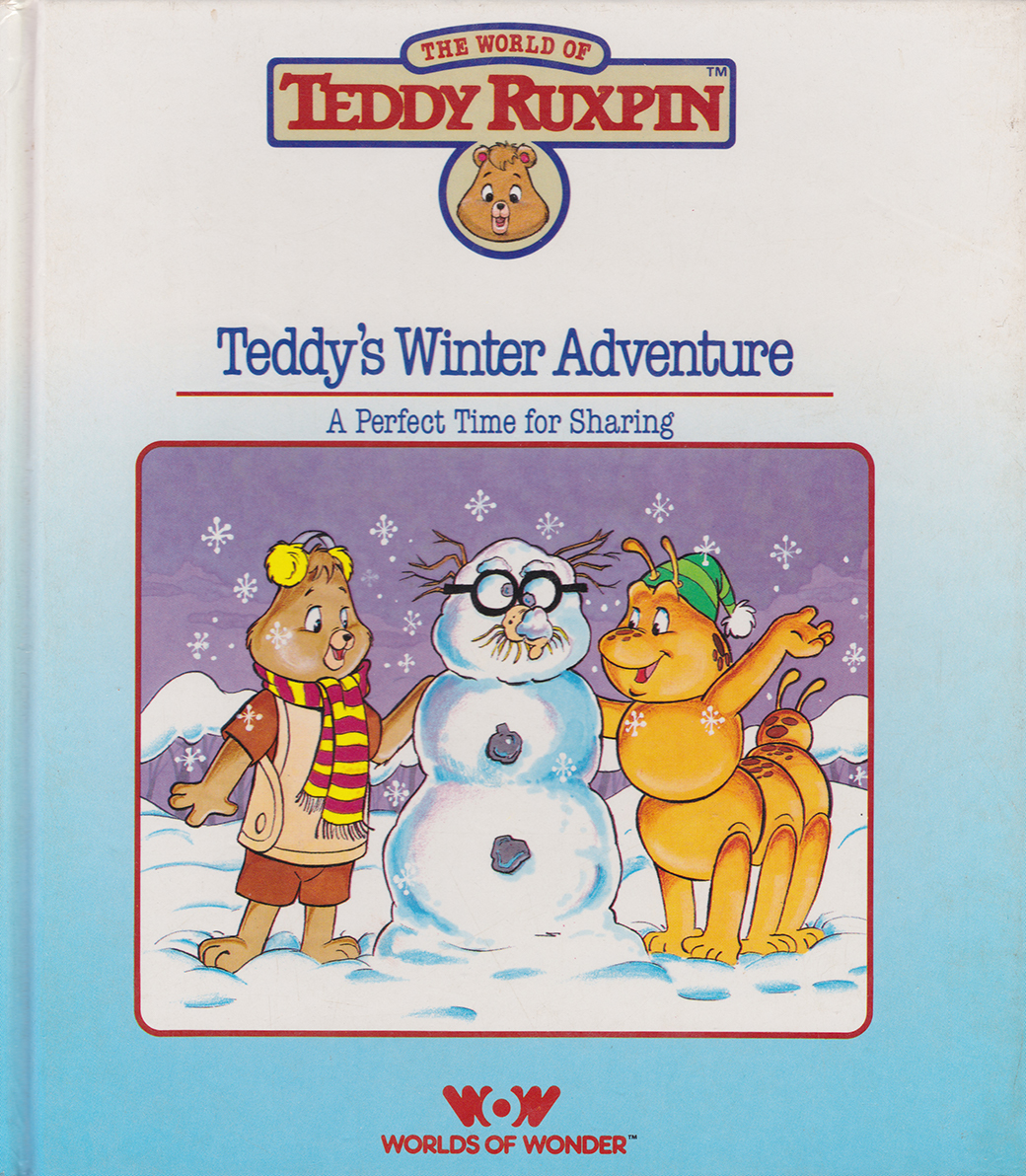 A Perfect Time for Sharing

...that was our first winter away from Rillonia, and it’s one I’ll always remember.

“Teddy’s Winter Adventure” is a seasonal story from “The World of Teddy Ruxpin”. Featuring themes of spending time together, gift-giving, and even forgiveness, it serves as a more secular holiday story compared to the later “Teddy Ruxpin’s Christmas”.

This episode would later serve as the basis for an episode of “The Adventures of Teddy Ruxpin” by the same name.

“This holiday story illustrates the value of friendship and the importance of sharing with friends.”

The first snowfall of the year signals the arrival of winter in Grundo, and Teddy suggests that he, Grubby, and Gimmick extend an old tradition from Rillonia: gift-giving. The three friends prepare gifts that they share with friends across the land before exchanging gifts with each other. When many of the gang’s other friends arrive to exchange their own gifts, Tweeg attempts to put a damper on the festivities with a blast from his cannon, which backfires when it causes an avalanche that engulfs his tower.

The story begins with Teddy asking the listener what their favorite season is, and admitting that his own favorite is Winter. He then relates one morning where he, Gimmick, and Grubby woke up to find it had grown cold and snowed overnight. Grubby anxiously suggests they go play in the snow, but concedes that they should have breakfast first.

After breakfast, the three friends go out to find the entire valley blanketed in snow (“The Snowflakes Are Falling”). Teddy and Grubby reminisce about the winter seasons they celebrated in Rillonia: how they would share gifts and bake sweets. Gimmick suggests they bring that custom to Grundo, and the two eagerly agree.

Over the next few days, the three begin making gifts, cookies, and cakes to share with their friends and each other. Gimmick goes out, asking the two not to look in the closet where he has presumably left their gifts. Once he’s gone, Grubby toys with the idea of looking in the closet, but Teddy convinces him not to.

Once the gifts are ready, the team loads up the Airship, and Grubby tries to refrain from eating all the cookies before they have a chance to share them with their friends. At first concerned that they’ve never flown the Airship in the snow, the three are excited to find it flies just as well, despite the weather.

With their gifts on board, the trio set sail across Grundo. Their first stop is Rainbow Falls, where the Fobs are astonished to receive their gifts. Gimmick explains that it’s a custom Teddy and Grubby have brought from Rillonia, and wish the Fobs a happy winter season. From there, the Airship continues its journey over the land, sharing gifts wherever it sails (“This Gift is For You”). From the Wooly What’s-It, Leota the Woodsprite, and the Grunge Village, they spend the day spreading winter cheer.

The next morning, the three return home to share their own gifts with each other. Grubby opens his gifts first: eight pairs of mittens from Gimmick and eight pairs of slippers from Teddy. Gimmick is next: a scarf, hat, and earmuffs from Teddy, and a new monkey wrench from Grubby. Finally, Teddy opens his gifts. From Gimmick, he receives a wind-up mechanical bird that plays music (“The Snowflakes Are Falling”). From Grubby he receives a raincoat, rain hat, and boots.

After the gifts have been shared, a series of knocks at the door reveal that Wooly, the Fobs, Leota, and the Grunges have arrived with their own gifts for Teddy, Grubby, and Gimmick (“This Gift is For You”).

As the house full of guests begins to sing, Tweeg becomes irritated by the sound. He decides to fire his cannon at Gimmick’s house, and L.B. helps load it. The singing is disrupted by the loud boom from the cannon, but Gimmick and Teddy reassure everyone they’re perfectly safe from harm.

Unfortunately for Tweeg, the eruption of the cannon causes an avalanche that virtually covers his Tower.

Bidding farewell to their guests, the trio board the Airship once more, this time taking Tweeg some raisin muffins, hot chocolate, and a snow shovel to dig his way out of his tower.

Teddy wishes the listener a happy winter season and says goodbye as he and Grubby sing “The Snowflakes Are Falling” one final time.