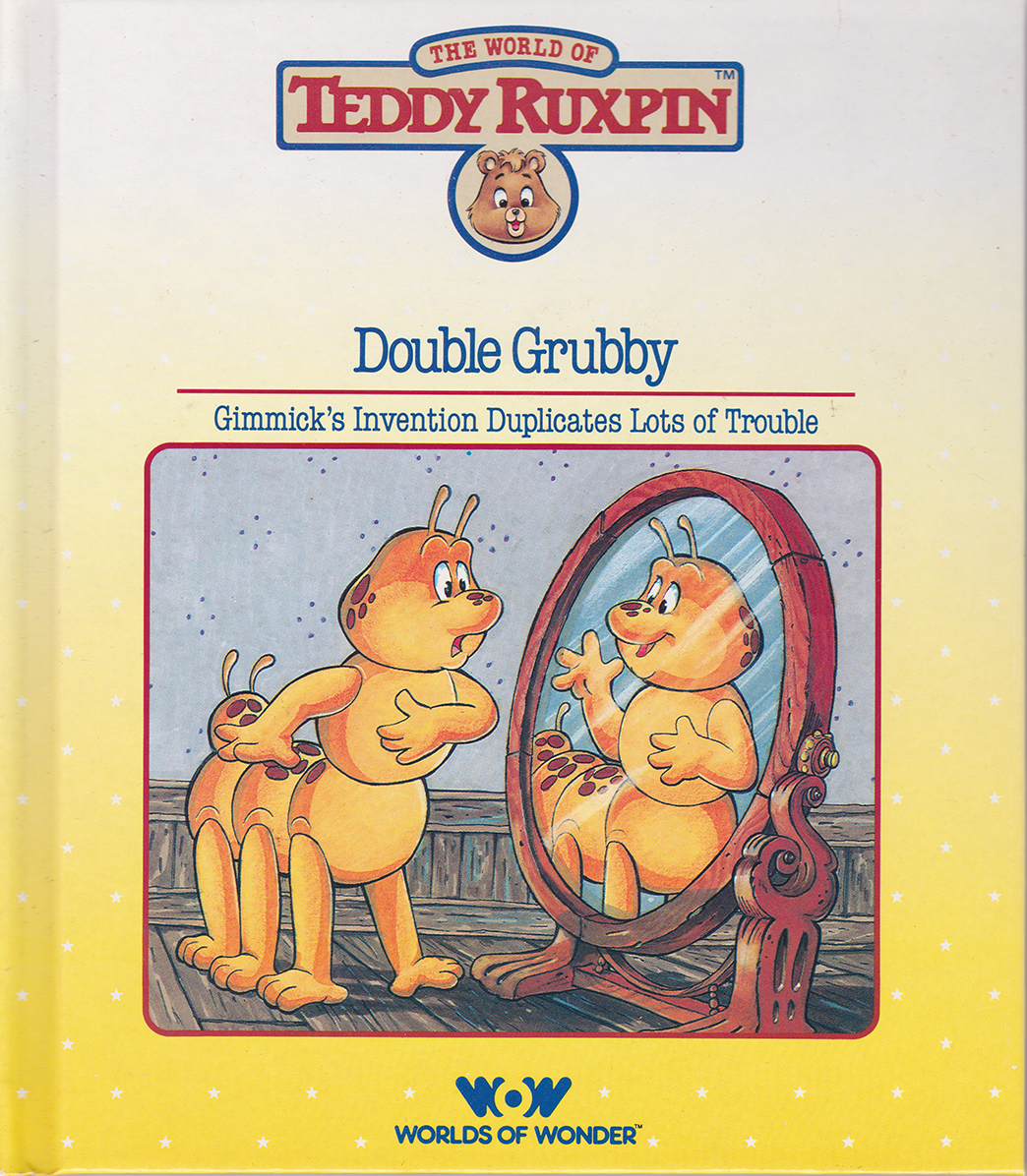 And I think each of us should be happy being ourselves because we can do it better than anybody else.

“Double Grubby” is a story from the World of Teddy Ruxpin Adventure Series. It was released for the original Worlds of Wonder and Wicked Cool Toys Teddy Ruxpin talking toys. Following “Take a Good Look,” the story is notable for introducing the magical property of the second Crystal found in the Hard-to-Find City.

“This story illustrates the value of liking yourself, because you’re better at being you than anyone else.”

Newton Gimmick introduces a new invention: a “multiplication table”. Powered by one of the Crystals from the Hard-to-Find City, the device allows the table to create a duplicate of anything beneath it. While attempting to help fix the malfunctioning table, Grubby unwittingly becomes the subject the table duplicates, resulting in a second Grubby appearing in the room. Unable to tell which Grubby is the real Grubby, the confrontation ends when the duplicate Grubby ultimately disappears, proving the effects of the duplicate object to be only temporary.

The story begins with Teddy introducing himself and beginning to tell a story. He’s interrupted when Grubby arrives and seems a bit jaded that Teddy has yet to introduce him. Grubby asks Teddy to introduce him first, and Teddy agrees to start over. After giving Grubby a glowing introduction, Teddy begins to tell the story of the “Multiplication Table.”

Teddy and Grubby come home to Gimmick’s house, where the inventor seems excited to see them. He invites the two to help him with an experiment, which makes Grubby nervous enough that he instinctively tries to leave. Teddy convinces him to stay and let Gimmick explain what the experiment entails.

Gimmick explains that he’s created a Multiplication Table or duplicating machine. When he tries to explain its functions, Grubby is unimpressed and confused by Gimmick’s jargon. The inventor assures him the concepts are easy to understand if you’re “naturally scientific” (“Naturally Scientific”). Teddy seems to grasp that the table is designed to create a second copy of any object placed beneath it. When he names an apple as an example, Grubby becomes enthusiastic and asks for a demonstration.

Gimmick places an apple under the table and initiates the duplication. The group is astonished to see not a second apple, but instead a banana appear atop the table! Distraught by the result, Gimmick makes further adjustments and tries again. But the table malfunctions and produces an orange instead. With Gimmick growing increasingly distressed, Grubby--eager to prove he is every bit as “naturally scientific” as Gimmick--volunteers to fix the machine. Reluctantly, and perhaps hoping to prove Grubby’s hubris, Gimmick lets him tweak the machine. A moment later, Grubby gives the go-ahead to try the machine again.

This time, the Multiplication Table produces a monkey wrench! Satisfied that Grubby is not nearly as scientifically inclined as he professed to be, Gimmick asks Teddy to help him reset the controls on the machine. Grubby wanders off while the table is reset. Before attempting another duplication, Teddy begins to hear a strange sound coming from beneath the table, but Gimmick is unconcerned and continues with the experiment.

Pushing the button, something appears on the table: but it’s not a banana, orange, monkey wrench, or even an apple! Instead, it’s...Grubby! He explains to Teddy and Gimmick that having fixed all of the machine’s controlled himself, he was certain the apple must be the problem, and decided to make sure it tasted all right. Teddy deduces this is the crunching sound they heard earlier.

But then they hear another, identical crunching sound coming from beneath the table! When they go to investigate they find...Grubby!

The two Grubbies greet each other, but the disposition of the Grubby on top of the table seems much more sour. Gimmick realizes that the Grubby atop the table is a duplicate of the real Grubby who had gone under the table to eat the apple. His experiment is a success! The two Grubbies begin arguing with each other, and when Teddy tries to help them get along, they stubbornly refuse.

The argument between the two Grubbies continues to escalate until suddenly the duplicate Grubby begins to fade and finally disappears completely. Gimmick determines that the effects of the duplicating machine are temporary, just as the banana, orange, and monkey wrench disappear in turn. Grubby seems relieved that his doppleganger is gone, as he was “too handsome for his own good.”

Grubby admits to enjoying that story, and tells Teddy that he learned a valuable lesson: he’s better at being himself than anyone else, even an exact duplicate. We should all be grateful for being us, because we’re better at it than anyone else (“I Like Being Myself”).