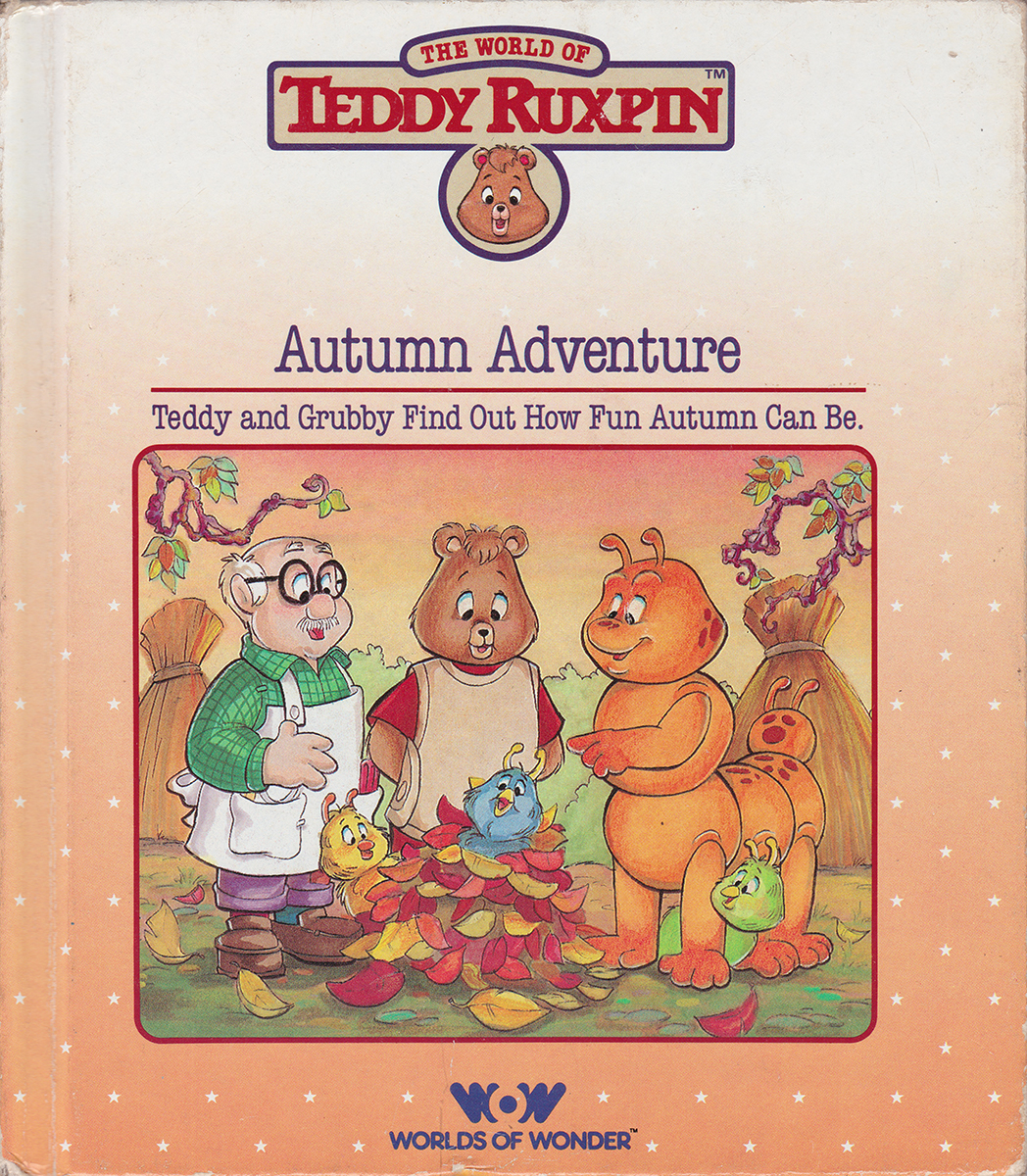 Teddy and Grubby Find Out How Fun Make Believe Can Be.

We can still have lots of fun in autumn.

“Autumn Adventure” is a story from the World of Teddy Ruxpin Adventure Series. It was released for the original Worlds of Wonder and Yes! Entertainment Teddy Ruxpin talking toys. It follows other seasonal stories such as “Grundo Springtime Singtime” and “Teddy’s Winter Adventure”.

“This musical story shows how much fun making believe with your friends can be.”

When Grubby begins to feel depressed at the end of summer, Teddy tries to show him there is still lots of fun to be had in autumn. They build Mudblup costumes and try to scare Gimmick, who is unimpressed but eager to join them. After failing to scare a flock of Fobs, they go to Wooly’s house to find that Wooly is terrified he is being attacked by real Mudblups. Wooly is eventually convinced to join them and decides to build a giant flower costume. The group find a band of Grunges wearing pumpkins on their heads, and agree to join in the Pumpkin Parade.

As Teddy greets the listener, Grubby surprises him and asks Teddy to explain all about autumn, which he has a hard time pronouncing. Teddy agrees and begins the story of their “Autumn Adventure”.

It begins with Grubby feeling confused and a little depressed that the beauty of summer is fading away: the weather is getting colder and the beautiful flowers and trees are beginning to wither. Teddy tries to cheer him up by suggesting they can still have fun in autumn, but Grubby is unconvinced as he tries to pronounce “autumn” correctly (“The Autumn Song”).

To cheer Grubby up, Teddy reminds him that they are all invited to the Wooly What’s-It’s house for a feast that evening. To tide Grubby over til then, Teddy reminds him of a custom they used to do every autumn in Rillonia: dressing up in scary or funny costumes and surprising their friends. Grubby enthusiastically suggests they come up with a scary costume and surprise Wooly at dinner! But first, they decide to practice on Gimmick.

Teddy and Grubby head down to the river and begin to craft costumes out of mud and branches: making themselves look exactly like a couple of scary Mudblups (“The Make Believe Song”). As they finish, they see Gimmick approaching and hide. Moments later, Teddy and Grubby jump out to scare Gimmick, but the inventor proves too smart for them, recognizing them immediately. Teddy assumes it’s because their costumes aren’t very convincing, but Gimmick reassures him by explaining that Mudblups never venture outside in the daytime. Realizing their mistake, Teddy and Grubby seem disheartened, having hoped to surprise Wooly at his party that evening. Gimmick is excited at the idea and wants to participate, so they band together to make Gimmick his own Mudblup costume.

Gimmick gets into character, startling Grubby, and the group decide to go scare the Fobs while they wait for Wooly’s party. They fly the Airship to Rainbow Falls and land it out of sight. They creep up to the falls and jump out to startle the Fobs, but the Fobs are unphased, easily recognizing their friends. The Fobs laugh when Teddy explains they’re supposed to be dressed like Mudblups. Even the Fobs are smart enough to know that Mudblups are generally bigger than Teddy, don’t have eight legs like Grubby, and don’t wear glasses like Gimmick. They agree that Wooly is not likely to be surprised, given how big, strong, and brave he is.

Disheartened, the trio don’t even bother trying to sneak up on Wooly, instead landing the Airship right in front of his house and walking right up to the door. When Wooly answers, but is mortified to find three Mudblups standing at his door. He darts across the yard and climbs a tree, refusing to come down. Teddy and his friends try to coax him down, explaining that Mudblups are usually much bigger, don’t have eight legs, and don’t wear glasses. This seems to convince Wooly, who comes down to the ground and excited about the idea of playing make believe.

But rather than dress as something scary, Wooly instead decides to dress up as a flower, and the group helps him make a flower costume. Wooly suggests that after dinner they head down to the Grunge Village and surprise the Grunges.

By the time dinner is finished, it’s dark, and the group head very carefully down the path through the jungle. Suddenly in the distance they can see lights dancing through the trees. Getting closer, they can see tall creatures dancing in the clearing...with pumpkin heads! The sight scares the four friends, who cower in the bushes, drawing the creatures’ attention.

It’s quickly revealed that the creatures are the Grunges themselves, playing their own version of make believe by carving pumpkin heads for themselves. They’re surprised to find others who enjoy playing make believe, and explain that they were about to commence their annual Pumpkin Parade, inviting the already-in-costume foursome to join them. The group of Mudblups, Pumpkins, and a giant flower march off into the crisp autumn night (“Pumpkins on Parade”).