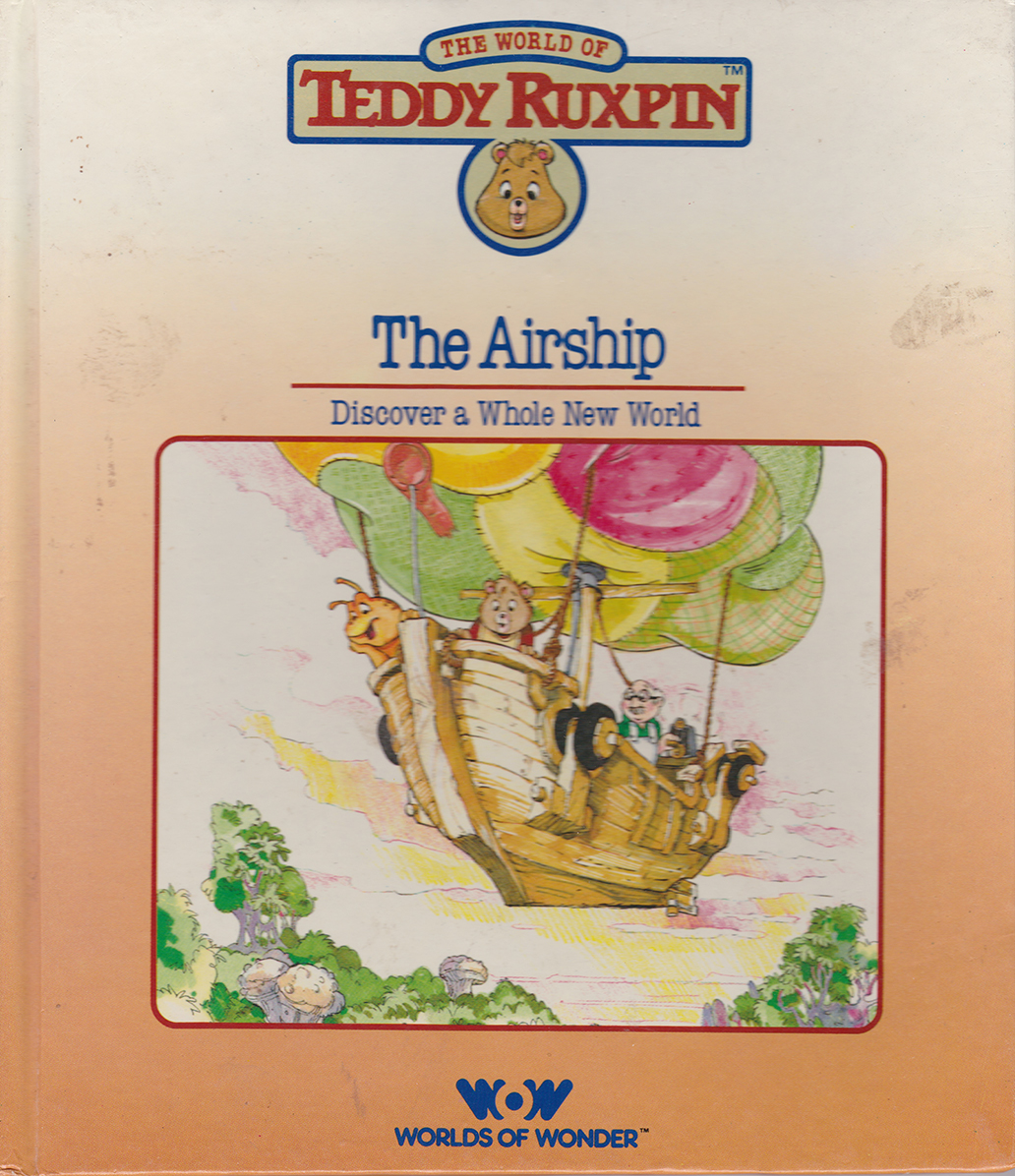 The important thing would be the people we would meet and the things we would discover along the way.

“The Airship” is the first volume of The World of Teddy Ruxpin Adventure Series and has been packaged--in one form or another--with every version of the Teddy Ruxpin talking toy with the exception of the Wicked Cool Toys iteration.

The story serves as an introduction to The World of Teddy Ruxpin, introducing the main characters and the Land of Grundo.

“The Airship” is dedicated to Ken Forsse’s late wife, Wendy.

“This story tells the value of having a dream to follow.”

The story begins with Teddy Ruxpin and Grubby the Octopede entering the Land of Grundo in their search for the fabled Treasure of Grundo. Along the way, they meet inventor Newton Gimmick, who presents to them his latest invention: an airship. After a few mishaps in launching the craft, the three friends crash into a tree, proving to be the home of Leota the Woodsprite. Leota eventually helps the trio develop a proper navigation system for the Airship, and they fly off in search of the treasure.

Teddy Ruxpin introduces himself to the listener and asks them to open the book to the first page. He then allows a chime to play, instructing readers to turn the page when they hear the chime. Teddy then introduces Grubby the Octopede, his best friend, who greets the reader. The two then sing a song together: “Your Friend”.

Teddy explains that he and Grubby had found an old map, which indicated that there was a treasure hidden in the Land of Grundo. Teddy and Grubby leave their homeland, Rillonia, in search of the treasure. After their long journey into Grundo, the two friends camp overnight to give Grubby’s feet a rest.

The next day, Teddy and Grubby meet Newton Gimmick, a kind, old inventor. When Gimmick learns that Teddy and Grubby are in search of a treasure, Gimmick offers to show them his latest invention, and takes them back to his house in the valley. It’s here that Gimmick unveils his “Airship”: a huge ship with a giant airbag attached to it. According to Gimmick, pumping hot air into the airbag would cause the ship to rise and lift off the ground, allowing the group to fly across Grundo to find the treasure. Meanwhile, Teddy and Grubby remark to each other that “something doesn’t seem quite right” about the Airship’s design.

Aboard the ship, the airbag begins to inflate, causing the ship to life off the ground. But as the airbag inflates, it pushes the ship unevenly, causing it to flip over and crash. The trio realize that letting the airbag pull the ship up rather than push it, would be a more effective design. They suspend the ship from the airbag and re-inflate it, which proves a much more effective method.

One thing they don’t account for is how to steer the ship! Without any way to navigate, the quickly end up crashing into a huge tree! The tree turns out to be the home of a tiny winged lady named Leota, who claims she is a “woodsprite” and is none too pleased by the intruders. Gimmick insists Woodsprites don’t exist, but Teddy assumes Leota is telling the truth, commenting that she is very pretty. This compliment soften’s Leota’s disposition, and she agrees to help the three friends get the Airship to the ground and install a propeller that attaches to the rudder to help direct the ship’s flight.

Bidding farewell to Leota, the newly modified Airship sets sail once again, this time in the proper direction, in hopes that Teddy, Grubby, and Gimmick will soon find the Treasure of Grundo. Teddy and Grubby sing “Come and Discover” as the trio sails away.