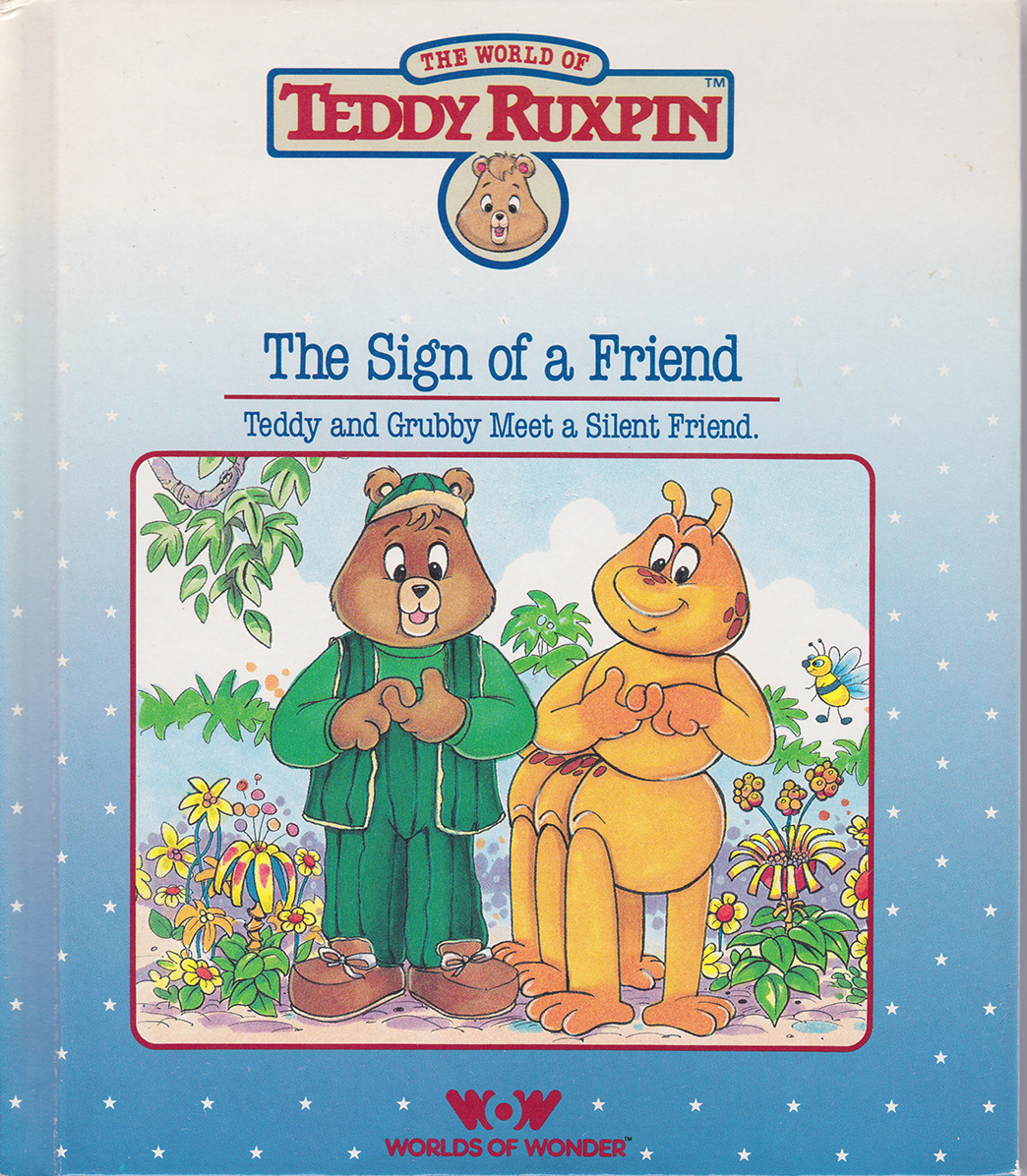 ...a pat on the back, a handshake, or even a smile are ways in which we can all talk without saying anything.

“The Sign of a Friend” is a story from the World of Teddy Ruxpin Adventure Series. It was released for the 1st and 2nd generation Worlds of Wonder and Yes! Entertainment Teddy Ruxpin talking toys. The story introduces American Sign Language as a means to communicate with a deaf person, and introduces the deaf character Katie the Woodsprite.

“This story shows the value of learning new ways to communicate with each other.”

While on a nature hike, Grubby consumes a mysterious plant called a “shush-bush”, which causes him to lose his voice. Initially panicked by his inability to talk, the three friends encounter Leota the Woodsprite, who teaches them that they can communicate with Sign Language. She introduces them to her deaf student, Katie, and Grubby’s voice eventually returns.

Newton Gimmick invites Teddy and Grubby on a nature hike through the forest where he points out all the different plants as they pass by.

While Teddy helps Gimmick pick some herbs for his soup, he notices a strange looking plant that Gimmick describes as “the shush-bush”. Before he can explain further, Grubby gobbles down a mouthful of the plant, which causes Gimmick to panic. He tells Grubby that the bush’s name comes from the fact that it often causes the person who consumes it to lose their voice!

Grubby initially shrugs off Gimmick’s alarm, but suddenly loses his voice in mid-sentence.

Grubby begins flailing his arms around wildly, trying to communicate, but Teddy and Gimmick are unable to understand him. Teddy asks Gimmick to hand Grubby a pencil and paper, and Grubby writes down his question, “How long” will this last? Gimmick explains rather soberly that the voice paralysis has been known to last anywhere from one hour to ten years!

The news sends Grubby into a panic, and he finally collapses in an upset heap.

Suddenly, Leota the Woodspirte arrives. When Teddy explains what’s happened, Leota reminds Grubby to never eat something if he doesn’t know what it is. Then she shows them a new way for Grubby to communicate with his friends: with his hands. Teddy initially assumes she means using gestures--such as pointing to something you want--but Leota explains she is talking about Sign Language, and shows the three friends some basic signs for phrases like, “It’s nice to meet you” and “I am glad you are a friend of mine” (“It’s Nice to Meet You”).

Leota explains that she learned Sign Language from her deaf student, Katie. The trio say they would like to meet Katie, but Teddy asks how they can tell Katie their names. Leota shows them how to “fingerspell” their names (how they can spell each letter of the alphabet with one hand), and helps give each of them a “name sign”: signing the first letter of their names in a special way that is uniquely their own.

That night, Leota brings the trio a special book that they can use to learn all kinds of signs, and the three practice communicating in Sign Language. Grubby seems especially adept at this, using all of his legs and feet to sign a whole sentence at once.

In the midst of introductions, Grubby’s voice suddenly returns!

Relieved that he was shown different ways to communicate even without his normal speaking voice, Grubby and his friends are thankful for the many ways people can talk to each other with simple gestures, glances, and Sign Language (“The Signs of a Friend”).