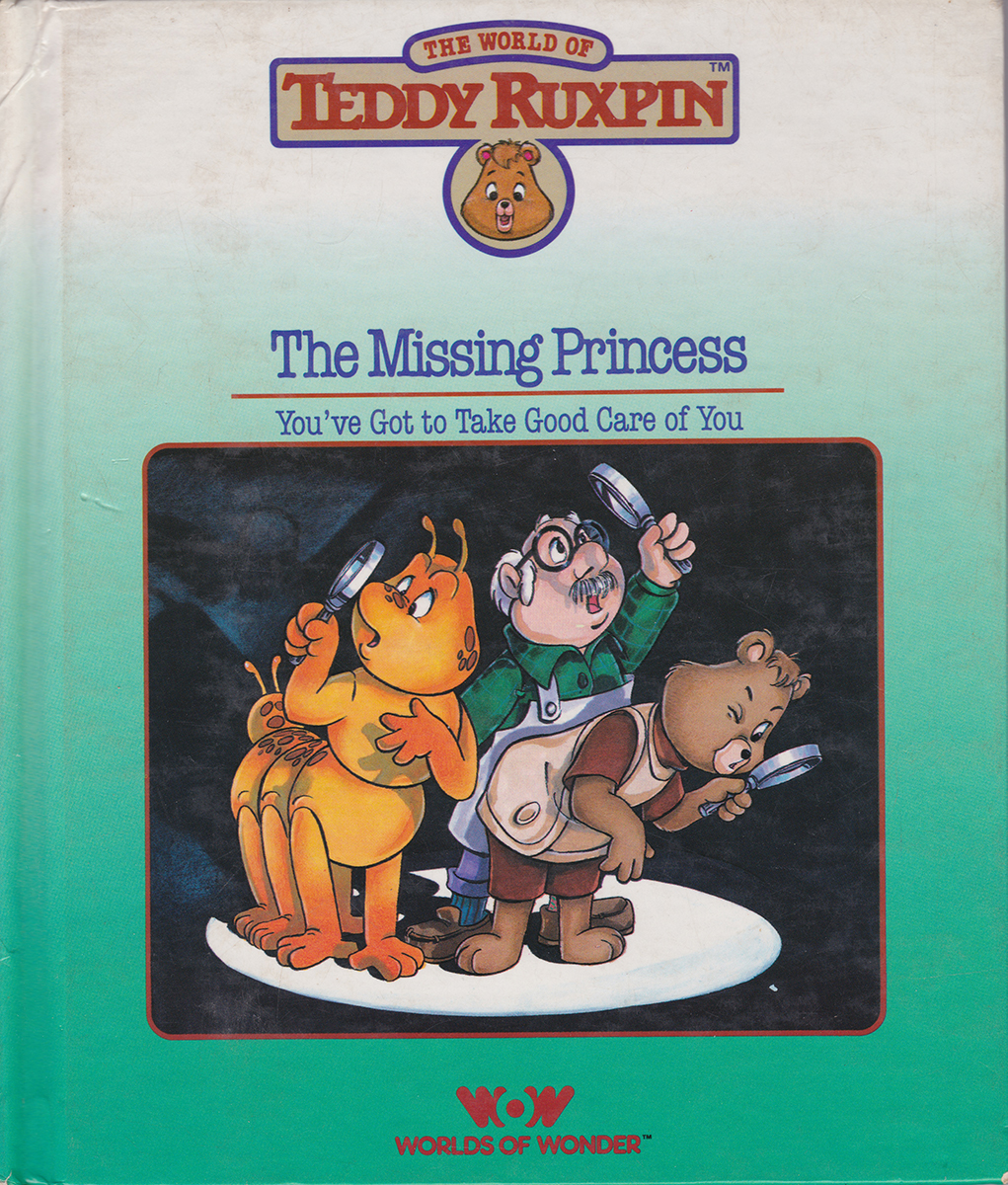 You've Got to Take Good Care of You

I never once gave up hope.

“The Missing Princess” is the longest story of The World of Teddy Ruxpin Adventure Series and concludes the story arc set out in “The Airship”. The story describes Teddy Ruxpin and his friends’ quest to find the Treasure of Grundo, and the search and rescue of the titular missing Princess Aruzia.

The story first appeared in the 1985 Worlds of Wonder Teddy Ruxpin talking toy and was not released again until the 2006 BackPack Toys iteration.

While many of Teddy’s stories usually present a “value” readers can take from it, this story is particularly unique as Teddy presents an extended message of children’s safety at the end.

“In this adventure, children learn the importance of safety and taking good care of themselves.”

While searching for the fabled Treasure of Grundo, Teddy Ruxpin, Grubby the Octopede, and Newton Gimmick, run out of fuel for the Airship, which forces them to land in the desolate Great Desert where they are captured by Mudblups. Imprisoned, they meet Prince Arin, so explains that his sister, Aruzia, has been kidnapped and is still missing. The heroes escape the Mudblups and resolve to forego their quest for the Treasure to instead help Prince Arin find his sister.

On their journey, they meet the Wooly What’s-It, who agrees to take them to the Wizard of Wee Gee. The Wizard reveals that Princess Aruzia is being held captive in the Hard-to-Find City by the nefarious Gutangs. The gang fly the Airship to the top of the Treacherous Mountains and sneak into the City, where they manage to overpower the Gutangs and free Aruzia.

The Gutangs sound the alarm marking the Princess’ escape, and the Airship is waylaid by Gutang flying machines on its departure. Our heroes manage to fight off the Gutangs as the Wooly What’s-It makes a heroic sacrifice to ground the last plane. Wooly survives a fall from the Mountains, and the gang set off to return Arin and Aruzia home to their father, King Nogburt.

A special message from Teddy and Grubby follow, in which many child safety tips are shared. It ends with Teddy and Aruzia singing “Let’s Keep the World Safe For the Children”.

The story picks up almost immediately after the events of “The Airship”, with Teddy, Grubby, and Gimmick flying the Airship in search of the Treasure of Grundo. They quickly run out of the firewood they had been using to fuel the hot airbag, and are forced to land in the middle of the Great Desert.

The desert proves no place to find firewood, but Gimmick ends up tripping over something that turns out to be a lump of coal. He determines that this will make a good substitute for the firewood they’d been burning, if they can find enough of it. Grubby finds plenty coal in a nearby cave, and the trio set to work digging it up and carting it back to the Airship.

As the sun begins to set, the three friends attempt one last haul. They begin to hear strange sounds, and despite Gimmick’s insistence that no creatures could possibly live in such a climate, they soon find themselves surrounded by strange, bipedal creatures made entirely of mud! The creatures are irate that the trio had been stealing their precious coal, and even though Teddy offers to compensate them for it, they are marched away to stand before the muddy creatures’ leader.

The mud king demands that Grubby--have many appendages--shall be “put to work”, while Teddy and Gimmick are carted away and jailed. As Teddy and Gimmick begin to wonder what kind of creatures these must be, a voice behind them replies, “They’re Mudblups”.

Teddy and Gimmick are introduced to their cell mate: Prince Arin, the son of King Nogburt. He explains that his sister, Princess Aruzia, has been kidnapped. Arin had been searching for her when the Mudblups captured and imprisoned him. The new friends begin to think of how they might escape their cavernous confines.

A Mudblup guard arrives with food, which he spoons out to the prisoners. Upon tasting it, they lament it is unequivocally awful. Suddenly, a loose part of the ceiling falls into Gimmick’s plate, revealing a speck of sunlight. Together, Teddy, Gimmick, and Arin manage to dig their way through to the floor of the Great Desert.

The three make their way back to the Airship, resolving to go back and rescue Grubby. Gimmick comes up with a pan and, leaving Prince Arin to guard the Airship, he and Teddy return to the Mudblup Caves, this time with glowing lanterns in hand. Having lived their whole lives in the darkness of their tunnels, the Mudblups scatter when confronted with the bright light, clearing the way for Teddy and Gimmick to call out for Grubby as they make their way through the underground halls.

They find Grubby working in the kitchen, and he confesses that he had made them his specialty for lunch: Roasted Root Stew. Together, the trio head for the safety of the Airship.

Once safely in the air, Teddy introduces Prince Arin to Grubby, and the friends announce that they are postponing their search for the Treasure of Grundo so that they can help Prince Arin find his kidnapped sister. With no obvious leads, the group head north to look for clues.

Running low on water, Grubby spots a waterfall, and the Airship lands. When they arrive at the falls, the group find a huge, furry, purple creature bathing beneath them! When Teddy asks politely if they might get some water, the creature barks at them to leave. Grubby is decidedly less polite, and insists that they need water if they’re ever going to find Princess Aruzia. The creature softens at the mention of a missing princess, and become enraged again when he learns that the princess was in fact kidnapped. The creature resolves to take the group to see the Wizard of Wee Gee, who may be able to lend some clue as to where the princess is being held captive. They also learn that the creature is named the Wooly What’s-It.

Wooly proves too big to fit into the Airship, so the band walk through the jungle to the Wizard’s fortress. Wooly waits outside while the rest sit down at a huge table. The Wizard asks everyone to concentrate and begins to conduct a seance, despite Gimmick’s scientific reservations.

A pointer on the table begins to move, pointing at various letters on its surface, spelling out, “G-U-T-A-N-G-S”. The Wizard tells the group that Princess Aruzia is being held by the evil Gutangs. The Gutangs live high in the Treacherous Mountains in the ancient Hard to Find City, the Gutangs have aircraft of their own to thwart any intruders. Grubby becomes anxious at the mention of the Treacherous Mountains and Hard to Find City: that’s where the Treasure of Grundo is purportedly hidden! A glass dome on the wall near the table beings to project pictures of Princess Aruzia in the Gutangs’ clutches. After getting directions from the Wizard--who insists that no one has ever been able to scale the Treacherous Mountains, the group set off to save the princess.

Teddy, Grubby, Gimmick, and Prince Arin fly the Airship to the Treacherous Mountains and land while they devise a plan to rescue Aruzia. Teddy asks Grubby to make an extra batch of Root Stew, much to Grubby’s puzzlement. The group enter the Hard to Find City in the middle of the night. They begin to make their way through the City, overpowering the Gutangs they encounter and disguising themselves in the large Gutang helmets. Our heroes continue to make their way through the City until they arrive at the Guard House. Using their disguises, our heroes are able to walk right by the other Gutang guards and finally find Princess Aruzia.

A brief reunion between Arin and Aruzia is cut short as the group disguise her in a helmet and begin to make their exit. Dawn arrives just as the group board the Airship and begin to lift off, and a blaring alarm rings through the City to signal the princess’ disappearance.

As the Airship lifts off and heads away from the City, the Gutangs begin launch their aircraft in hot pursuit. The small aircraft begin circling the Airship, firing arrows and rocks, one of which the propeller clean out of the Airship. WIth no way to navigate, the Airship begins to drift back to the Hard to Find City.

Teddy instructs Grubby to bring the Root Stew, which Grubby loads into a sling and begins firing at the pursuing Gutang airplanes. Blinded by the stew, the pilot’s plane begins to plummet to the valley below. Grubby loads a sling for Arin and he and Teddy begin firing at the ensuing craft, taking them out one by one. Meanwhile, the Gutangs continue launching more planes until suddenly the Wooly What’s-It appears on the launching platform, having scaled the Mountains himself!

Wooly begins to smash the Gutang airplanes and chasing their pilots away, leaving Teddy and Arin to to fend off the planes which had been launched. A final plane circles the Airship, but Grubby informs them that they are all out of Root Stew! Desperate to fend off the last plane, the group begins to despair. Then the plane circles by the launching platform, and Wooly jumps out onto the craft, sending it plummeting into the valley below.

Our heroes land the Airship and hurry to where Wooly lies, unmoving. The Gutang pilot, seeing the group coming, scurries away. Wooly rouses to consciousness, seemingly unharmed, and smitten by Princess Aruzia. Aruzia thanks the group for saving her, and Teddy remarks that it’s time to get her and Prince Arin home.

Navigating purely by memory, Prince Arin is able to guide the Airship and its crew through Grundo until the familiar parapets of King Nogburt’s Castle can be seen on the horizon.

Teddy and Aruzia sing the closing verse of “Come Dream With Me Tonight”.

The final eight minutes are spent with Teddy and Grubby informing listeners of special child safety tips. Some of it is put to song ("When You're In Charge"). At the conclusion, Teddy and Aruzia sing a duet of “Let’s Keep the World Safe For the Children”.