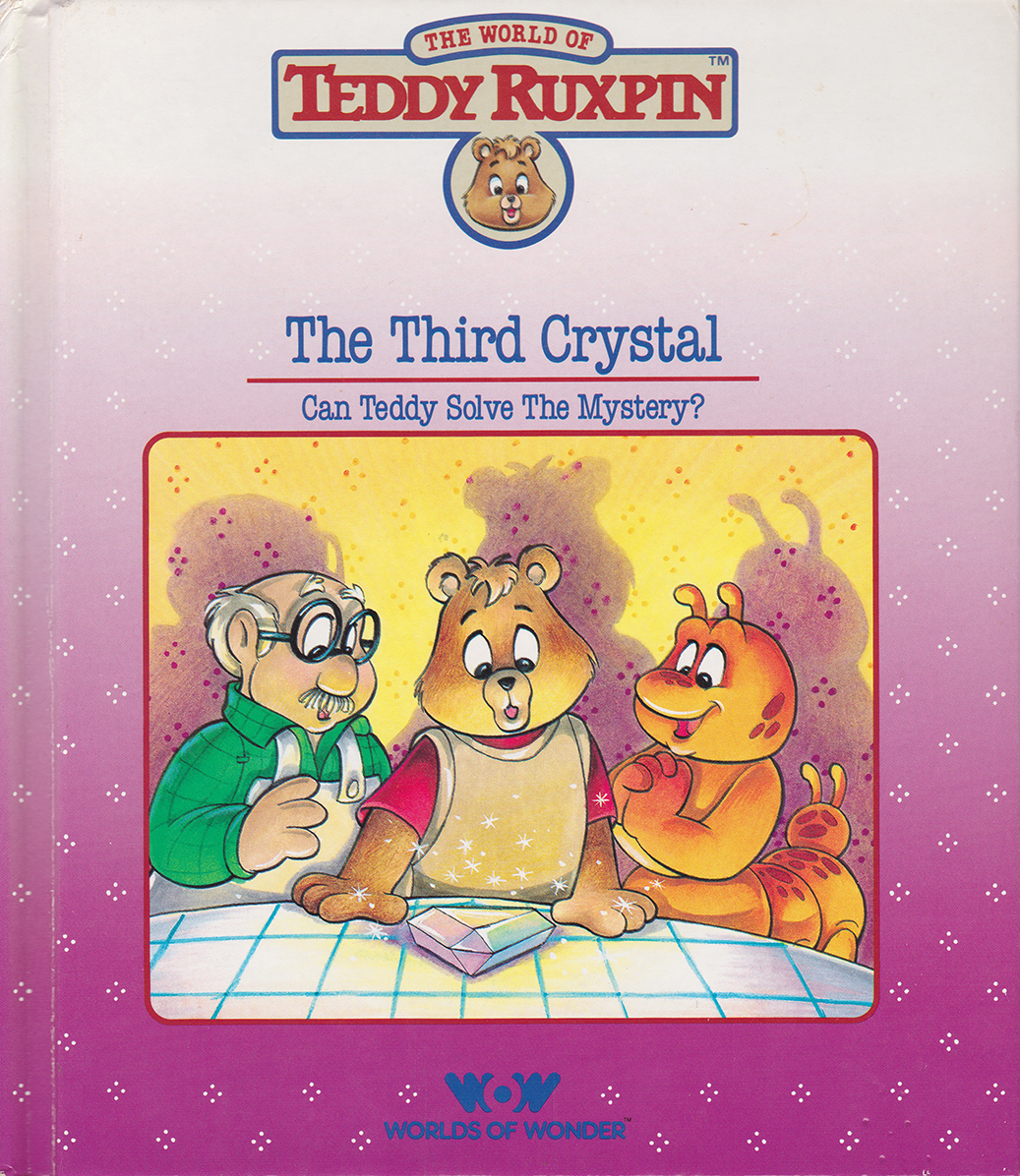 Can Teddy Solve The Mystery?

And we discovered that things sometimes disappear for different reasons.

“The Third Crystal” is a story from the World of Teddy Ruxpin Adventure Series. It was released for the first and second generation Worlds of Wonder Teddy Ruxpin talking toy. The story is one of the few to deal directly with the Crystals found in the Hard to Find City and the final story to introduce one of their powers.

“ This story shows the value of using a little ingenuity to help your friends in a time of need.”

After Gimmick apparently loses five of the six Crystals from the Hard to Find City, Teddy helps him recover them when they discover that the third Crystal has the power to make things invisible or visible. Meanwhile, Tweeg captures Fuzz the Fob, and Teddy and his friends must put this new Crystal’s powers to good use to rescue him.

In this story, Teddy and Grubby return from a walk to find Gimmick quite upset and beside himself. He reveals that he has lost five of the six Crystals they’d discovered in the Hard to Find City. He also explains that in addition to the Crystals, Fuzz has disappeared as well!

Grubby concludes that Tweeg must have taken the Crystals and Fuzz, but Teddy convinces them to search for a bit more proof before they accuse Tweeg of anything. They ask Gimmick to reproduce what he was doing when the Crystals were lost. Gimmick takes them back to his workbench, where he was set to examine the third Crystal. The other five had been laid out on the tabe when Gimmick placed the third Crystal on a copper plate and shone a flashlight onto it. That’s when he heard a strange “whirring” sound, and they disappeared.

The friends use this knowledge to shine the light through the third Crystal onto the workbench where suddenly the other five Crystals reappear!

Relieved to have the Crystals back, Grubby wonders if Gimmick may have accidentally made Fuzz invisible while he was working on the Crystal. They take the Crystal and Gimmick’s flashlight around the house and shine it on everything they can, hoping to make Fuzz visible again (“Fuzz, Where Are You?”)

After searching the house, the group concludes Fuzz isn’t anywhere to be found. They search outside, but quickly discover a note tacked to Gimmick’s front door. The note is from Tweeg, stating he’s kidnapped Fuzz and won’t return him unless Gimmick agrees to leave the Valley by morning.

The scene shifts to Tweeg’s Tower where the villain is having a hard time keeping his hostage under control. When Fuzz proves uncooperative and immune to Tweeg’s methods of intimidation, Tweeg has L.B. lock Fuzz in a cage. Tweeg is overjoyed at the idea that his plan might actually work this time, and his evil deed will surely guarantee his acceptance into M.A.V.O.: the Monster and Villain Organization.

As Tweeg begins to celebrate, the door to his Tower suddenly opens of its own free will! Then the door to Fuzz’s cage opens on its own! Moments later, Fuzz appears to float out his cage and levitates around the room while Tweeg and L.B. begin to hear a strange sound and determine the Tower must be haunted! They flee the Tower immediately, and it’s revealed that it was, in fact, Teddy that had been turned invisible by the third Crystal and whispered to Fuzz to stay calm as he lifted him around the room.

The four return to Gimmick’s House, explaining the powers of the Crystals to Fuzz and realizing that there could be any number of reasons why things simply seem to “disappear” (“Now You See It, Now You Don’t”).

Meanwhile, Tweeg and L.B. are huddled outside Tweeg’s Tower, too terrified to go back inside and confront the “ghosts”.