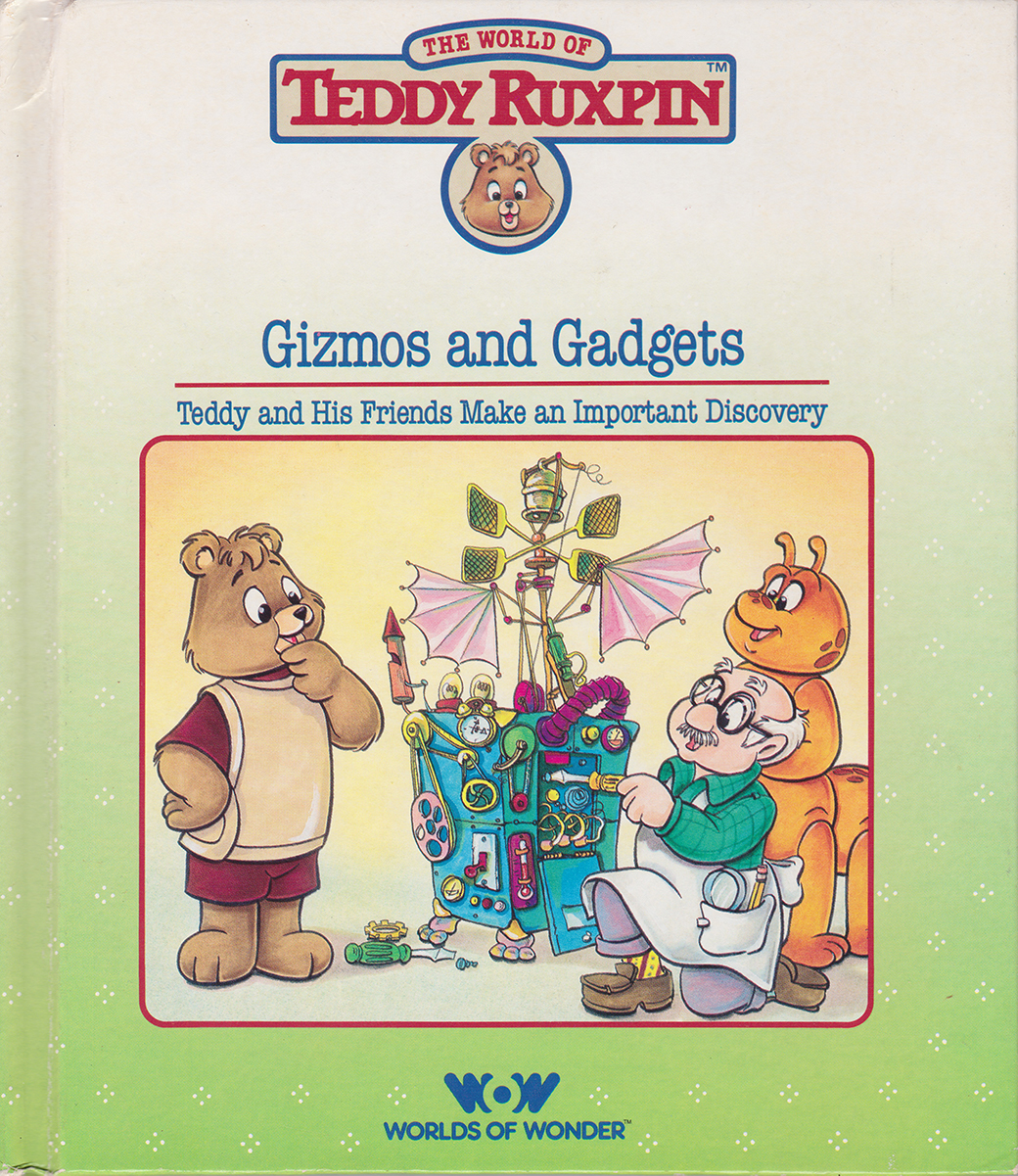 Teddy and His Friends Make an Important Discovery

It doesn’t matter what other people think of you as long as you believe in yourself.

“Gizmos and Gadgets” is a story from the World of Teddy Ruxpin Adventure Series. It was released for the Worlds of Wonder and Playskool Teddy Ruxpin talking toy.

“This story shows the importance of learning that you can always count on yourself.”

When King Nogburt invites Teddy, Grubby, and Gimmick to a Logic Faire at his castle, Gimmick begins to dread that none of his inventions are good enough to impress everyone. He decides to bring a wind-up music box to the Faire, but the three friends are stopped along the way when they see Frank and Faye Fob in trouble! Gimmick uses the parts of his music box to help save the Fobs, and Teddy discovers that others’ opinions are less important than believing in yourself.

The story opens with Teddy greeting the listener before asking Grubby what he’s wearing on his head. Grubby replies that it’s a new hat, and even if Teddy thinks it looks silly, he thinks it looks nice. Teddy replies that he agrees the hat looks nice and that you shouldn’t worry too much about what other people think. Grubby explains that he learned that lesson at the King’s Logic Faire, and Teddy begins to relate that story.

One day, Gimmick arrives home,bursting excitedly into the room with a letter from the King’s messenger. Grubby asks what it says, and Gimmick reads aloud:

Come one, come all!
It’s my intention,
To view each gadget and invention,
Or some discovery that’s rare!
So please attend my Logic Faire!”

The letter is signed by King Nogburt himself!

Teddy and Grubby are excited for Gimmick to have the chance to show off his inventions to the kingdom, but Gimmick explains the invitation is for all of them, not just himself. Grubby suggests that he “invent and invention” while Teddy “discover[s] a discovery”. Teddy agrees, and the three get to work.

Meanwhile, Gimmick begins to despair as none of his inventions seem to work properly. He’s afraid he’ll be embarrassed in front of all of Grundo’s greatest inventors.

Grubby demonstrates his own invention: a Root Detector. It’s essentially a long tube through which you can look while pointing the other end at the ground. Once you see a root in your line of sight, you’ve detected it and can pick it, presumably to cook later.

This does little to cheer Gimmick, who seems despondent while he contemplates his many inventions that don’t seem to function as intended. Teddy suggests he show off the Airship, which flies beautifully. Grubby agrees that the Airship has turned out surprisingly well, despite the fact that it was originally supposed to be a boat. This causes Gimmick to lament that none of his inventions--even the ones that work--do what they were designed to do.

As Gimmick gets more depressed, Teddy and Grubby ask him to bring out all of his inventions so they can pick something for Gimmick to show off at the Logic Faire. One is a “Flotsam Eliminator”, but Gimmick confesses he doesn’t know exactly what “flotsam” is. Next is a pair of shoes that leave a fluorescent glow on the ground whenever you take a step, so that you can always see where you’ve been. Despite working fairly well, Gimmick isn’t confident that these will be good enough for the Logic Faire.

The final invention is a giant music box. Inside the box are various instruments: an accordion, violin, xylophone, trombone, and a drum. After winding up the box, the instruments play themselves. It turns out to work very well, but the music is uncomfortably loud, and the only way to turn it off is to wait for the machine to wind down...which can take a couple of hours.

As the three friends take a walk to escape the blaring music, Teddy and Grubby try to convince Gimmick he’s not nearly as hopeless an inventor as he believes himself to be (“Gimmick”).

Gimmick spends the next morning perfecting the music box, and Grubby and Teddy load it into the Airship. Grubby brings along his Root Detector, and as they lift off to head to the Logic Faire, Grubby notices that Teddy still hasn’t made a discovery to show off at the Faire. Teddy assures him he is working on it.

As they fly over Grundo, Grubby accidentally hits the button on the music box, causing it to blast its music again. As the tune quiets down, the crew hears rumbling far below as they pass over Trembly Fault: a vast crack in the earth that is expanding itself with an earthquake! And in the midst of the earthquake came several squeaky voices: Frank and Faye Fob calling for help!

The Fobs had been on their way to the Logic Faire with their own invention: a tiny wagon for carrying baby Fobs called a “Fobulator”. But the earthquake has separated Frank and Faye from their babies, and the parents are now isolated on a single rocky pillar in the middle of the chasm!

The Airship lands, and the crew try to devise a plan to rescue Frank and Faye. They first suggest they may be able to fly the Airship over the fault and lower a rope to the Fobs, but Frank and Faye are worried they may lose their grip on the rope and fall.

Gimmick believes the easiest thing to do would be to construct a bridge, and to Teddy and Grubby’s confusion, insists they unload the music box from the Airship. Teddy thinks they’re going to play music for the Fobs until they think of a plan to rescue them, but Gimmick instructs them, to Grubby’s relief, to start taking the music box apart!

When he arrives at the rock pillar, Gimmick instructs the Fobs to hop inside the drum so he can carry them back, and sets back off across the bridge. A gust of wind causes the bridge to sway, and Gimmick uses the trombone to balance himself and make his way back to land where the reunites Frank and Faye with their babies.

Gimmick is overjoyed at his invention having worked so well, and is excited to show off his new “Porta-bridge” at the Logic Faire.

The team arrives at the Logic Faire, where several prominent inventors take interest in Gimmick’s “Porta-bridge”, and they all gather around to hear Teddy’s important discovery.

Teddy announces his discovery: that it doesn’t matter what other people think of you as long as you believe in yourself!

The crowd rejoices in this discovery and the story closes (“I’m Somebody I Can Count On”).