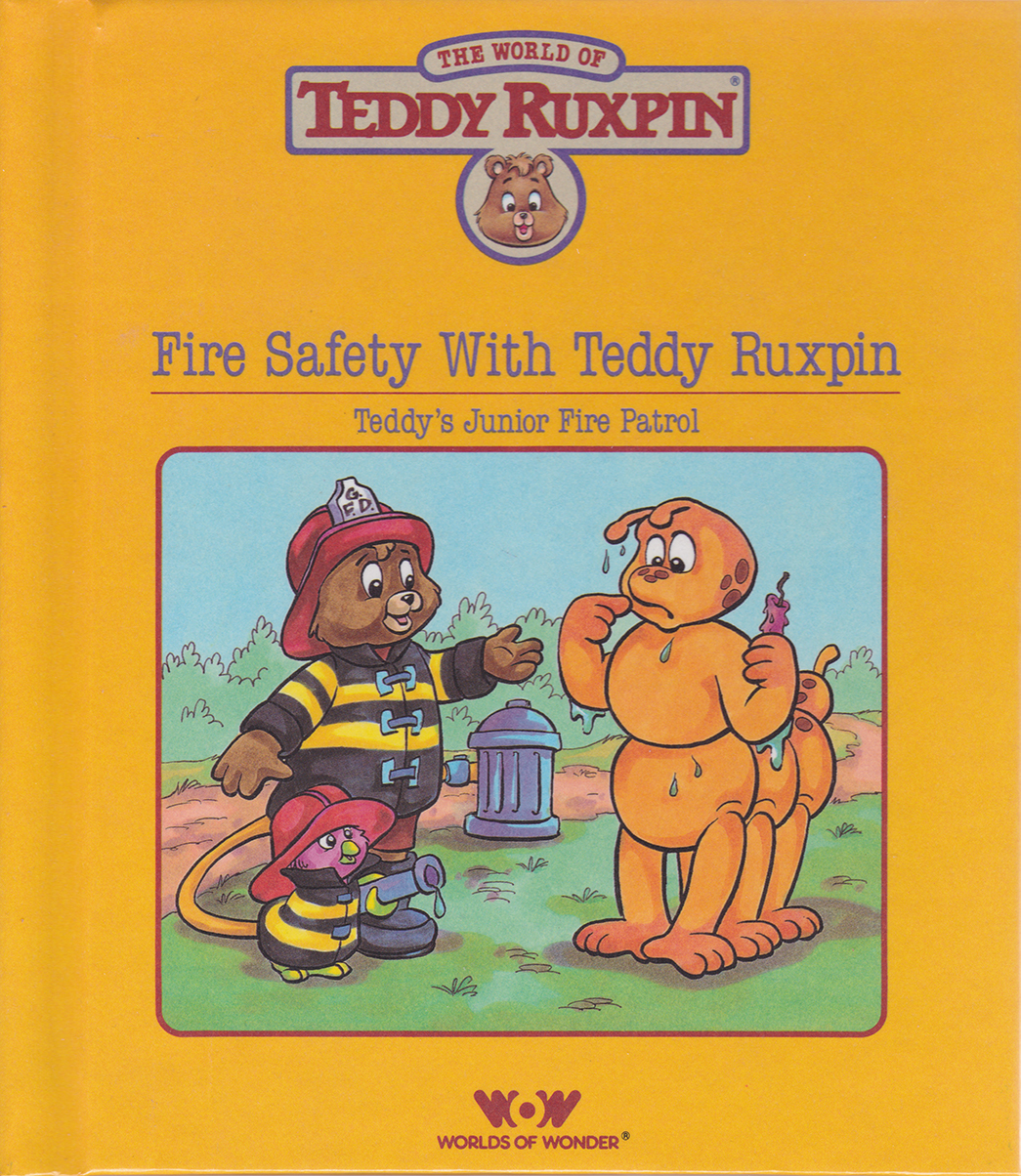 ...I’m gonna be the best Junior Fire Patroller of all.

“This story shows the value of knowing what to do if there’s a fire.”

Teddy, Grubby, and the Fobs form the Junior Fire Patrol. In the course of their first meeting, they review many of the most important fire safety rules. In the end, they end up learning how to be safe and keep calm during a fire and receive their own patches and fire helmets.

Teddy explains to the listener that he and Grubby have some important things to share with them, but Grubby is outside waiting for his next package from the Grundo Fire Protection League. Grubby insists he won’t budge until the package arrives, and Teddy suggests they tell a story while they wait.

Grubby says the story happened a long time ago, but Teddy reminds him it was only yesterday when they and Fobs formed their own Grundo Junior Fire Patrol to practice fire safety. At the meeting the day before, the group had reviewed some ways to make sure they don’t start a fire:

After reviewing their safety rules, Grubby gets some cookies he’d prepared for a snack and remarks that he has a sore finger. Teddy explains to the Fobs that Grubby burnt his finger taking the cookies out of the oven because he forgot the cookie sheet would be hot.

As the Fobs begin to eat, the fire alarm sounds and everyone begins to panic. Teddy calms them and they form a line and walk outside. When Grubby doesn’t accompany them, they realize that Grubby has invented his own fire alarm and was just testing it. A bit perturbed, the group heads inside where Grubby confesses he ate all the cookies during the fire drill.

They continue their meeting by reviewing any fire prevention they helped with. Flora, one of the Fobs, reveals that she went camping with her Uncle Flatbush in Boggley Woods. Her uncle forgot to put out the campfire when they’d gone to bed, and one of the other Fobs reminded him to do so.

Just then, the mailman arrives with a package from the Grundo Fire Protection League containing Volume 2 of the Junior Fire Patrol Manual explaining what to do when a fire occurs.

Teddy begins to read the manual aloud to the group. The first section explains what smoke detectors do and how to test them. The group goes around the house and tests the smoke detectors.

Next, the manual mentions that in case of a fire, there should be two exists to every room. The group again move around the house, finding at least two ways to exit each room. Teddy reminds them to test the door handle first to see if it’s hot, and to keep doors closed to block the fire while the occupants get out through a different exit.

When moving around during a fire, Teddy reminds everyone to stay low so they can crawl beneath the smoke and breathe more easily.

Once everyone is out of the building, everyone should gather at a predesignated meeting place so everyone can be accounted for. Once everyone is safely away from the fire, help can be called for. Make sure to know the phone number of the fire department as well as your own address so you can communicate where the fire is.

When one of the Fobs asks what they should do if they’ve left something important inside the house, Teddy reminds them that they should never re-enter a burning building under any circumstances.

The next chapter covers fire drills. Teddy and the Fobs each go into different rooms and wait for Grubby to ring his new fire alarm. Once the alarm sounds, everyone meets outside by the Airship, but one of the Fobs, Fern, begins calling from the house for help. Since the house isn’t actually on fire, the group goes back to the house to see what the trouble is.

The group finds Fern in the kitchen. She’s been frightened by Grubby, who’s dressed in a complete firefighter’s uniform! Grubby was coming through the kitchen window to rescue Fern, which scared the tiny Fob. Teddy reminds everyone not to be afraid of the firefighter, and Grubby suggests they try the fire drill again. This time, everyone makes it to the Airship.

Having executed a successful fire drill, the meeting is adjourned and they promise to meet again tomorrow.

Meanwhile, Old Beanly the mailman arrives with another package from the Grundo Fire Protection League. Teddy and Grubby take the package inside just as the Fobs arrive and the group opens the package together to find fire hats and badges for everyone alongside a note from the Grundo Fire Chief welcoming them to the Fire Safety Team! The group celebrates their new appointment (“Fire Patrol March”).