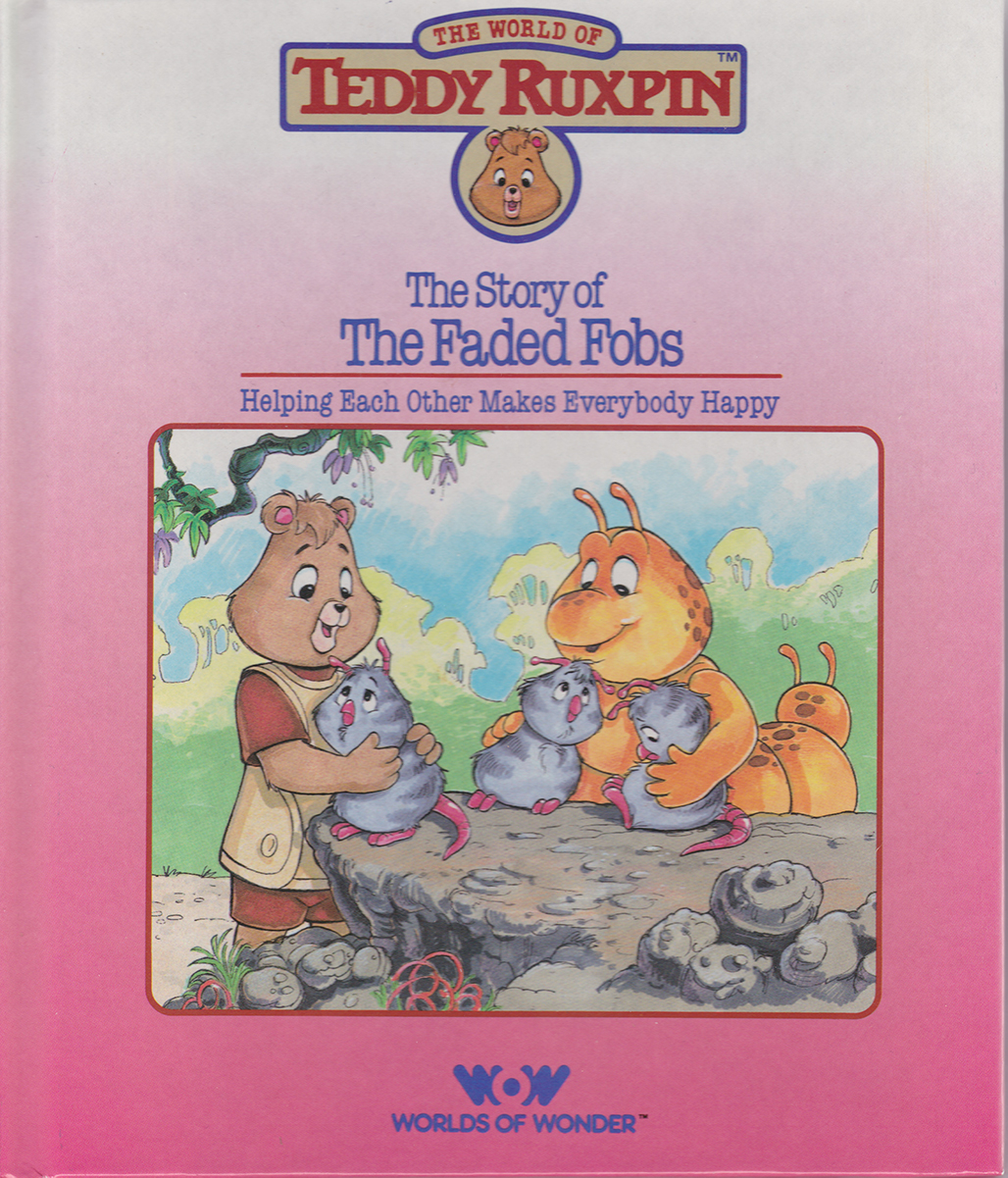 "The Story of the Faded Fobs"

Helping Each Other Makes Everybody Happy

Did you ever think how it would be if all your friends looked alike?

“The Story of the Faded Fobs” is one of the original stories released for The World of Teddy Ruxpin Adventure Series. It is the first story to prominently feature the Fobs, and reveals why they are often seen sporting different colors in their fur.

The story is also the first to feature the Wooly What’s-It following his initial appearance in “The Missing Princess”.

The story would later be adapted into an episode of “The Adventures of Teddy Ruxpin” titled, “The Faded Fobs”.

"This story shows the values of helping out when a friend is in need and of liking who and what we are."

While picking strawberries, Teddy and Grubby overhear a group of Fobs grumbling over how their colorful fur has faded. The Fobs explain that their colors come from drinking the multicolored water of Rainbow Falls, which has dried up. Teddy and Grubby enlist the help of the Wooly What’s-It, who manages to dislodge a large boulder from the mouth of the cave above Rainbow Falls, allowing the water to flow again, and restoring the Fobs’ colors.

Teddy and Grubby are picking strawberries for lunch, with Grubby managing to pick many more, thanks to his extra hands (“Two Hands Are Better Than One”), which apparently lets him eat while he picks them. They soon overhear the chirping sounds of many disgruntled Fobs nearby, and go to investigate.

The Fobs explain that they’re upset because their normally bright and colorful fur has begun to fade to a dull gray. Grubby suggests that perhaps the Fobs are getting old, but many of them profess to still be very young.

Looking all alike means the Fobs are losing part of what makes each of them unique, causing a crisis of identity.

Grubby tries to remedy this by using juice from the strawberries to paint red stripes on the Fobs, but this proves too uncomfortable and sticky for their taste, and attracts the attention of flies.

The Fobs begin to leave, because they have to walk a long way to get water. Teddy remembers that the Fobs usually get their water from Rainbow Falls, but the Fobs reveal that the Falls dried up weeks ago. Teddy quickly deduces that the Fobs’ colors began to fade at the same time Rainbow Falls stopped flowing.

The group arrives at Rainbow Falls to find it completely dry. They suspect that someone should go up to the top of the Falls to see where the water comes from, and Grubby suggests the only person strong enough to climb up the mountain is the Wooly What’s-It.

Teddy manages to convince Wooly to forego his usual naptime to help the Fobs. Wooly climbs to the top of the Falls and soon the water begins flowing again. On his return, Wooly explains that a big rock was blocking the entrance of the waterfall.

The Fobs begin to drink the rainbow water, and their colors quickly return. The Fobs are overjoyed at having their identities back and celebrate with Teddy, Grubby, and Wooly (“Proud to be Me”).