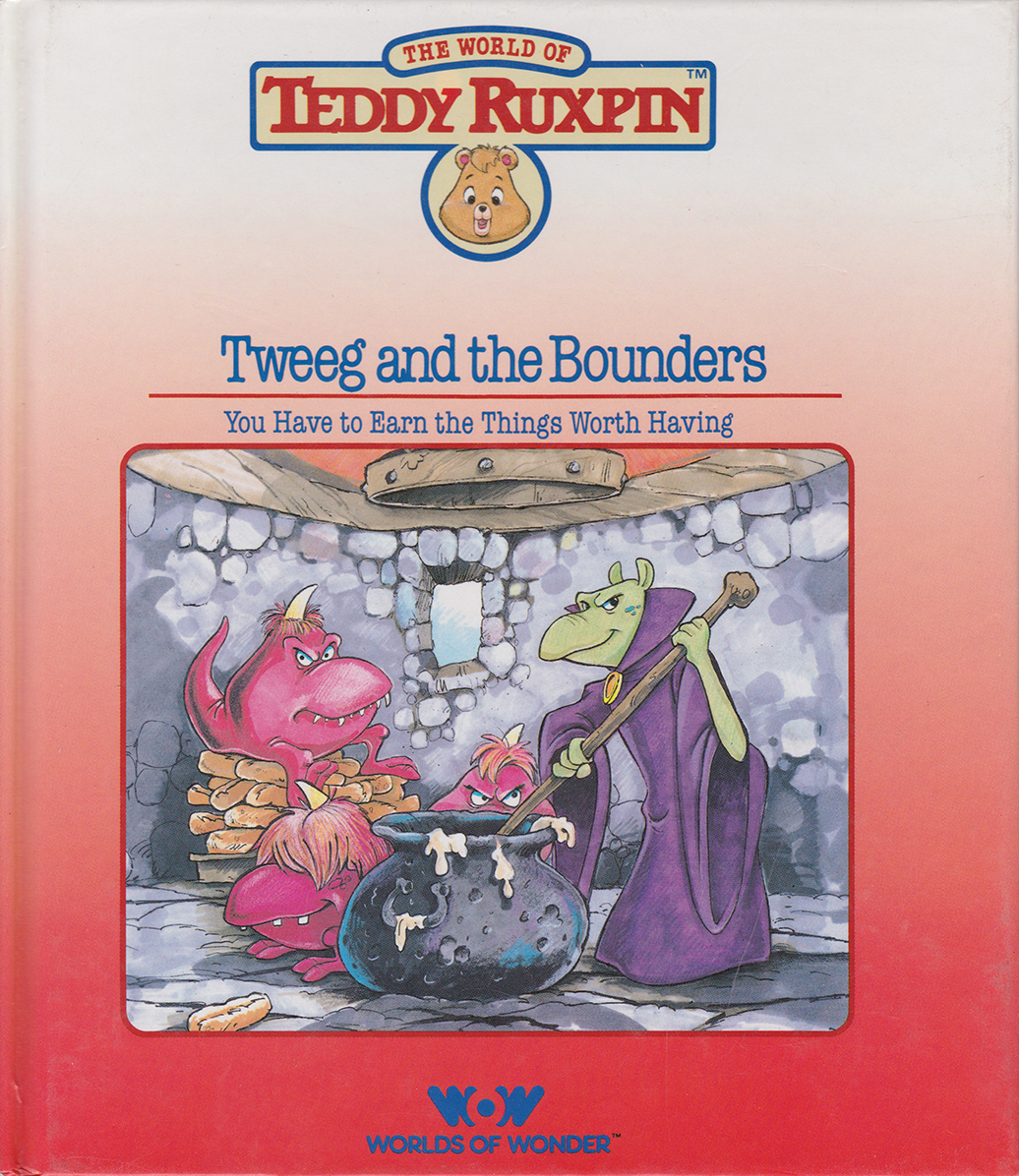 "Tweeg and the Bounders"

You Have to Earn the Things Worth Having

And if Tweeg should ever get lucky and make a lot of money, he probably still wouldn’t be happy.

“Tweeg and the Bounders” is one of the original stories released for The World of Teddy Ruxpin Adventure Series and serves as an introduction to the character of Jack W. Tweeg and his henchmen, L.B. and the Bounders.

"This story shows that a wish can be a wonderful thing but trying to get something the wrong way usually backfires."

“Tweeg and the Bounders” is one of the original stories released for The World of Teddy Ruxpin Adventure Series and serves as an introduction to the character of Jack W. Tweeg and his henchmen, the Bounders.

While Teddy, Grubby, and Gimmick discuss who Tweeg is and where he comes from, Tweeg is busy trying to make gold out of buttermilk. He sends the Bounders out to steal ingredients and supplies. L.B. steals a “whirlygig” from Gimmick’s house to blend the dough, leading Tweeg to make a big mess when he attempts to use it.

Teddy begins by letting Gimmick explain who Tweeg is and where he’s from: Tweeg has apparently lived in the valley since before Gimmick settled there and is an outcast from Ying who was not deemed evil enough to stay. It seems Tweeg is trying to rectify his reputation, and has enlisted the help of the Bounders in doing so, including Leader of the Bounders, or L.B.

The scene then shifts to Tweeg’s Tower, where Tweeg has apparently received his monthly allowance check from his mother, which he hopes will “tide him over” until he is able to become truly rich. Grubby speculates that Tweeg is probably too old to be getting an allowance from his mother, but Teddy is less surprised at Tweeg’s willingness to accept easy money.

Tweeg is soon distressed to find that his mother has cut his allowance in half, leading L.B. and the Bounders to grumble about their already measly pay getting further reduced. Tweeg pleads his case as a “victim of circumstances” (“To Be Rich”).

It appears Tweeg has been trying to get rich by attempting to make gold out of buttermilk, following a supposed recipe from an old book. With all his previous attempts winding up charred or simply emerging as buttermilk doughnuts, Tweeg and the Bounders set out to make another batch. Having run out the necessary ingredients, Tweeg sends the Bounders out to steal a fresh supply.

The Bounders return with the ingredients, and together they begin to help Tweeg (clumsily) follow the recipe. Tweeg’s egg-beater proves insufficient at mixing the dough, so Tweeg sends L.B. to find a suitable replacement. L.B. returns with what appears to be a proper dough-mixing device, but when Tweeg turns it on, it flies out of control, sending dough and ingredients flying everywhere and leaving Tweeg’s Tower in a mucky state.

Grubby explains that the full page for Tweeg’s recipe had been torn from the book and lying out of sight on the floor of Tweeg’s Tower. It turns out Tweeg has actually been following a recipe for making buttermilk doughnuts. Gimmick also notes that the actual page regarding gold clearly states that creating gold from scratch is impossible.

As Gimmick begins searching for his “whirlygig” invention, Teddy sings “Wishing”. At the conclusion of the song, L.B. returns to Gimmick’s house with his “egg-beater”, which turns out to be the missing “whirlygig”.