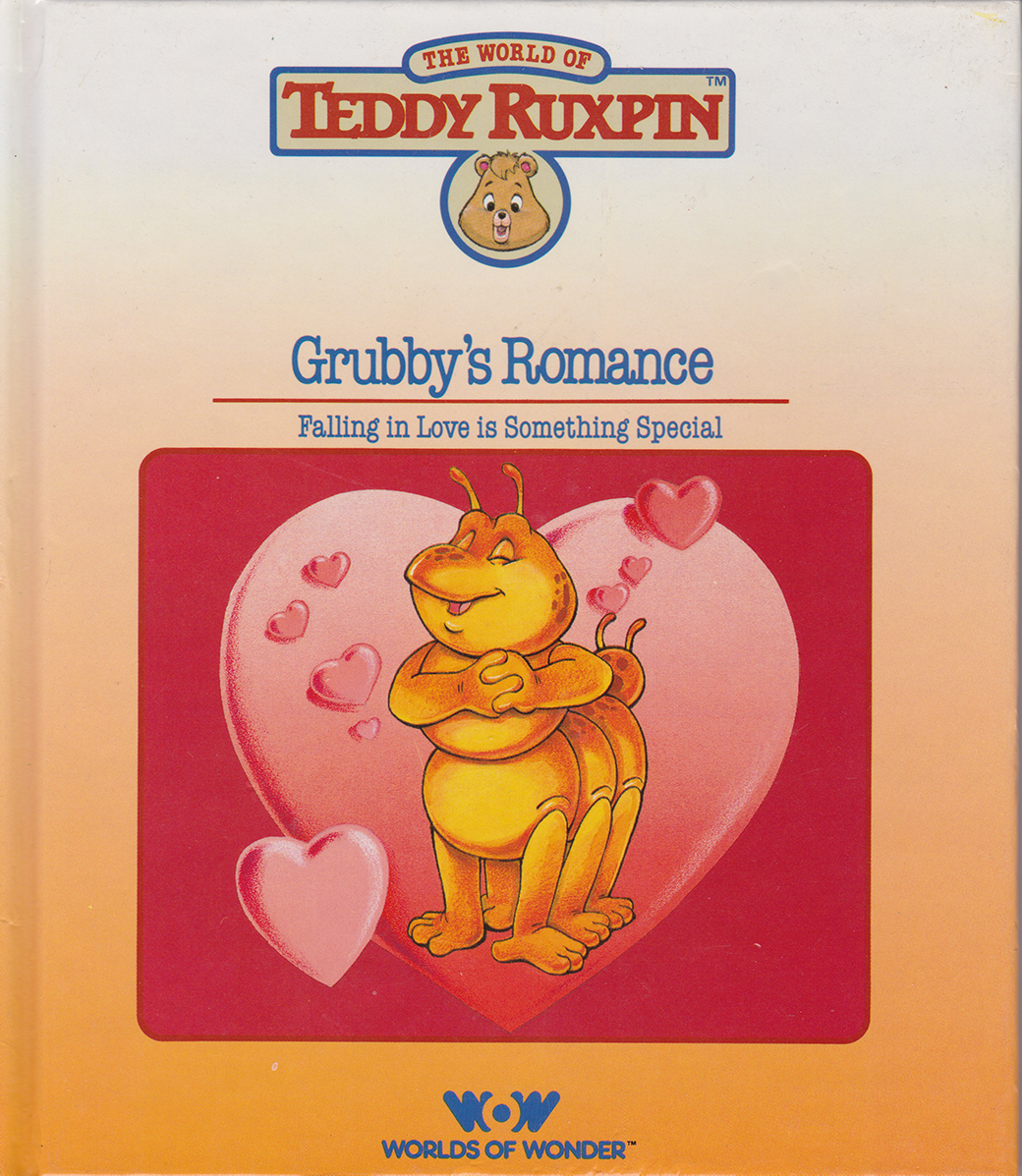 Falling in Love is Something Special

...I knew that it had only been an accident that I was in her world for a while.

In “Grubby’s Romance”, Gimmick’s new invention shrinks Teddy, Grubby, and himself down to bug size and they are quickly swept away by a strong breeze. While waiting for the butterflies to guide them back home, they attend a Spring Dance, where Grubby meets Karen the Caterpillar and the two form a very special bond.

This has been cited as Ken Forsse’s favorite Teddy Ruxpin story.

When Teddy, Grubby, and Gimmick prepare for a trip to the Hard-to-Find City and bring along Gimmick’s portable Reducing Machine, Tweeg sends L.B. down to sabotage them and the Bounder ends up shrinking the three friends and the Airship down to bug-size. A powerful wind blows them away from Gimmick’s yard, and they encounter a community of bugs who inform them that only the butterflies, who have yet to appear, can guide the lost trio back home. While waiting for them to arrive, Teddy and his friends attend the annual Spring Dance, where Grubby meets and falls in love with Karen the Caterpillar. After several days together, Karen forms a cocoon around herself and later emerges as a beautiful butterfly and helps guide them back to Gimmick’s house. Realizing he must go back to normal size, Grubby and Karen share a tearful farewell before Karen pushes the button to restore things to normal.

The story begins with Teddy explaining that Gimmick has made a portable version of his Reducing Machine from “Take A Good Look,” still powered by one of the Crystals from the Hard-to-Find City. Together with Grubby, they plan on returning to the City to see if they can discover any new information about the Crystals.

Unbeknownst to the three friends, Tweeg is watching from his tower as they load supplies onto the Airship. Suspicious as to what they might be up to, Tweeg demands that L.B. go down into the valley and take care of them.

A grumbling L.B. makes his way down from the tower as the last of the supplies is loaded on board and a wind storm begins to blow through the valley. Coming upon the Portable Reducing Machine, L.B. presses the red button, causing the Airship and its occupants to shrink down to just over an inch high. Unable to see them anymore from his tower, Tweeg rejoices that L.B. has made Gimmick and his friends apparently disappear!

The tiny Airship proves no match for the wind, and despite the crew’s best efforts get it under control, they are tossed around by the breeze until they become completely lost, eventually landing in a small forest miles from Gimmick’s house.

While still trying to get their bearings, the trio encounter a snail who--aghast at the idea the Airship could actually fly--has never traveled far enough to be of any help in showing them the way home. He agrees to let them walk with him as he complains of being late, yet again, for the annual Spring Dance, and he suggests the butterflies might be able to help them find their way back to Gimmick’s house. Unfortunately, the butterflies have yet to arrive, and so they take refuge inside a hollow tree where the Spring Dance is being held.

While Gimmick takes in the various species of bugs, Grubby is uncomfortable in the over-crowded space. Teddy suggests they simply enjoy the music for a while before heading back to the Airship, and it’s then that Grubby notices Karen the Caterpillar (“Looking Back at Me”).

After introducing himself, Karen and Grubby share a dance together and the two fall quickly in love. As Gimmick and Teddy try to figure out a way back to Gimmick’s house, Grubby and Karen spend every moment with each other they can (“Looking Back at Me (Reprise/#2)”

Suddenly, Grubby arrives in a panic and tells his friends there is something wrong with Karen. They follow Grubby to where she is and find Karen building a kind of “shell” around herself. Grubby asks what she’s doing, but Karen isn’t sure, only knowing it is something she must do. As the last of the shell is finished, she becomes completely enclosed, and Grubby is beside himself with worry, opting to stay with the enshrined Karen rather than return to the Airship with his friends.

Later, Gimmick and Teddy are discussing Karen’s predicament when Gimmick suddenly remembers that they’re still shrunk to a fraction of their normal size. He deduces that if things were of normal size, Karen would be a tiny caterpillar, and she would have built a cocoon around herself. As the two race to tell Grubby, they arrive to find Karen has emerged from her cocoon as a beautiful butterfly and reunited with an astounded Grubby. With the snail’s words in mind, she agrees to help Grubby and his friends find their way back to Gimmick’s house.

A swarm of butterflies escorts the Airship back to Gimmick’s house, where Karen pushes the green button on the Portable Reducing Machine, restoring the Airship, Teddy, Gimmick, and Grubby to their normal size.

Realizing how small Karen is compared to him, Grubby begins to bid Karen a tearful farewell, promising to never forget her, but knowing that she must go off on her own to share her beauty with the world.

Meanwhile, an exasperated Tweeg is shocked to discover that Gimmick and his friends have not actually disappeared.