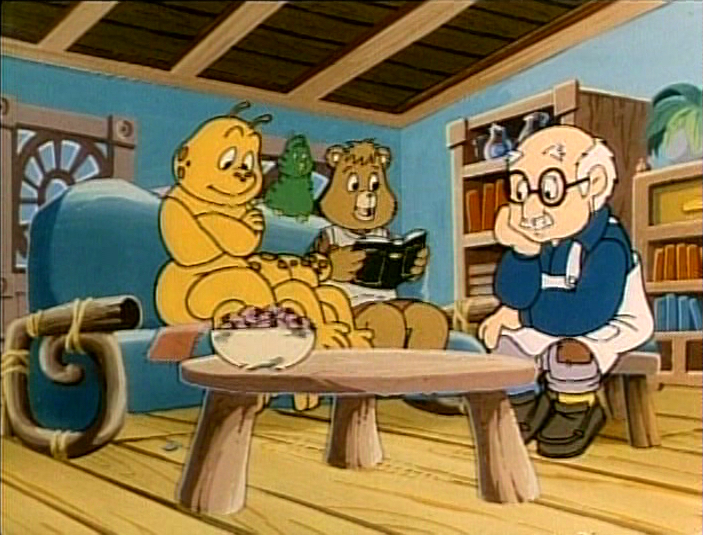 Have a question you'd like answered? Send it to us at vincentconroy@grundogazette.com and we'll try our best to answer it!

The most common questions will be posted here so everyone can get the answers they're looking for as quickly as possible!

No. This website is a fan-made website and is not owned or operated by Alchemy II or its affiliates. TeddyRuxpin.com is still run by Teddy's previous distributor, Wicked Cool Toys.

Do you, or have you ever, worked for Alchemy II?

Have you ever met anyone from Alchemy II?

Yes! I’ve been very fortunate to meet several of the people involved in Alchemy II, the creation of Teddy Ruxpin, and the career of Ken Forsse. They’ve all been incredibly kind, determined, and creative!

Can you put me in touch with someone from Alchemy II?

Unfortunately, no. While I’m grateful to have met many of the great people involved in Teddy’s creation and Ken Forsse’s life and career, I’m not at liberty to share those people’s contact information.

Actually, no. Like many fans, I had a Teddy Ruxpin website back in the late 90’s - early 2000’s. It’s still up and you can check it out here if you’re looking for a reason to smile!

When did you get your first Teddy Ruxpin?

I received my first Teddy Ruxpin on Christmas Day 1986! While the original model broke (as many did), I still have my childhood Teddy, and you can see his picture on many of this site’s pages!

How many different versions of Teddy Ruxpin are there?

To date, there have been five different versions of the Teddy Ruxpin talking toy!

Can I use my Teddy Ruxpin tapes on different versions?

Unfortunately, no. The original Teddy Ruxpin Adventure Series animated cassettes were specially programmed for that version of the bear (which had three servo motors) to control the mouth and eyes simultaneously). While other versions of Teddy--such as the 1998 Yes! Entertainment version--also used cassette tapes, they were not programmed the same way, and will therefore not work with that version of Teddy.

There is one exception to this: the late 1988 Teddy and the 1992 Playskool Teddy both used cartridge-style tapes that were interchangeable due to the toy’s design being virtually identical.

All other versions, unfortunately, are incompatible. You can see all the different versions of Teddy over on the Talking Toy page!

Was Grubby ever released for other versions of Teddy? Will Grubby work with other Teddy models?

You can find out all about the Worlds of Wonder Grubby talking toy over on the Talking Toy page!

How will I know which tapes work with my Teddy Ruxpin?

The easiest way to tell which tapes work with your Teddy is to look at the back of your Teddy Ruxpin. The 1985-88 toy, as well as the 1998 version, have full cassette tape players in the back, and you’ll need a compatible tape to use them in. The original tapes are labeled with the Worlds of Wonder “WoW” logo and are by far the most popular and easiest tapes to find. The Yes! Entertainment version of Teddy uses similar, but differently programmed tapes. These are labeled (rather misleadingly) as “The New World of Teddy Ruxpin”. Be sure to check your Teddy and the tapes carefully to make sure the cassettes are the right kind!

The 1988 and 1992 Teddy Ruxpin models are much smaller and use cartridge-style cassettes reminiscent of 8-track cassette tapes. These have proven difficult to find over the years, though a few can usually be found online. The good news is that, unlike other tapes, these are compatible between the late 80’s and early 90’s version of Teddy!

The 2006 BackPack Toys Teddy took special MP3 cartridges that slotted into his back. These have the benefit of not wearing otu as easily, but are harder to find.

The latest version of Teddy from Wicked Cool Toys, gets his stories from a bluetooth-connected app loaded onto a nearby smartphone or tablet computer. No extra tapes required!

For a full list of which stories are available for which toy, visit our Adventure Series page!

Are there more talking toys to connect to Teddy?

While Worlds of Wonder did produce a Grubby talking toy to work with Teddy, no other characters were realized in that form. Many, such as Tweeg, L.B., Wooly, and the Fobs, were made into beautiful plush hand puppets! A prototype of a talking Newton Gimmick was produced, but never released.

My Teddy is broken! Can someone repair him?

Like all toys, Teddy Ruxpin will wear with use and age. Fortunately, there are several pressences online for those looking to have their Teddy Ruxpin restored! If you're more a tinkerer, YouTube is a haven for many do-it-yourself repair video tutorials! One of our community leaders, IlliopMom, has gone ahead to compile a list of helpful YouTube tutorials for repairing different versions of Teddy and his talking toy friends!

Where can I buy Teddy Ruxpin?

If you’re looking for a “classic” Teddy, eBay is the place to go! There is usually a healthy circulation of Teddy Ruxpin toys in various condition ranging from brand new to (*gasp!*) parts only. You can also find a wide selection of accessories and even some rare and unique items if you’re determined enough to look!

If you’re looking for the latest version of everyone’s favorite Illiop, he can be found online via most major retailers, and you can often see him lounging on store shelves alongside some of his favorite fluffy friends!

I could’ve sworn there was a live-action Teddy Ruxpin show. Am I delusional?

Not at all! While it wasn’t a series, there was a live-action Teddy Ruxpin special produced by ABC which aired in the Winter of 1985! You can read all about it on here!

Was there a live-action series?

Unfortunately, no. While Ken Forsse had envisioned Teddy as a puppet show of sorts, it was simply too expensive to produce long-term, leading the crew to settle on traditional animation as the next medium for Teddy.

How many episodes were there in the animated series?

There were sixty-five episodes to “The Adventures of Teddy Ruxpin” animated series! You can read about them on the Animated Series page!

Was there ever a second season of the series?

Sadly, no. While the series ended on an exciting cliffhanger (no spoilers!), a second season was never produced, leaving the ultimate fate of Teddy, M.A.V.O., and the Crystals unknown, for now.

Is there a new series being made?

While a new series had been proposed by Jim Henson Productions in the Spring of 2018, it was ultimately never proudced. To date, the 1987 "The Adventures of Teddy Ruxpin" animated series is the only television series.

Where can I find the animated series?

If you’re looking to own the animated series, keep an eye out for a copy of the DVD sets that were released between 2006 and 2010. They contain all 65 episodes of the series and were the first release of the entire work since it originally aired in 1987!

If you’re looking to binge through “The Adventures of Teddy Ruxpin”, you can find it on Amazon Prime Video as well as The Roku Channel! Best of all, the entire series has been digitally remastered from the original master tapes! Teddy’s adventures in Grundo look and sound better than ever!

Who is making the Ken Forsse documentary?

The docuseries was created by documentary filmmaker and biographer Dr. Billy Tooma! You can check out his website detailing the film, its cast of interviewees, and the beautiful official poster here!

What is the documentary called?

Billy Tooma’s docuseries on the life and career of Ken Forsse is entitled “Ken Forsse: Come Dream with Me Tonight”!

Is the documentary a single film?

"Ken Forsse: Come Dream with Me Tonight" is a 9-part docuseries!

When will the docuseries be released?

Where will I be able to see the docuseries?

“Ken Forsse: Come Dream with Me Tonight” is available for free on Billy Tooma's YouTube channel! The video will also be embedded on the Ken Forsse page!

Who will be in the documentary?

Many of Ken Forsse’s family, friends, colleagues, and peers will be appearing in this documentary! From his wife Jan and daughter Theresa, to Phil and Michelle Baron, to Ken’s early business partner Bob Anselmo and Teddy Ruxpin cast members Rob Bockstael and John Koensgen; the cast spans Ken’s life and career from childhood, to Disney Imagineering, to Teddy Ruxpin and beyond! You can see a full list of the cast on the official website and our very own docuseries page!