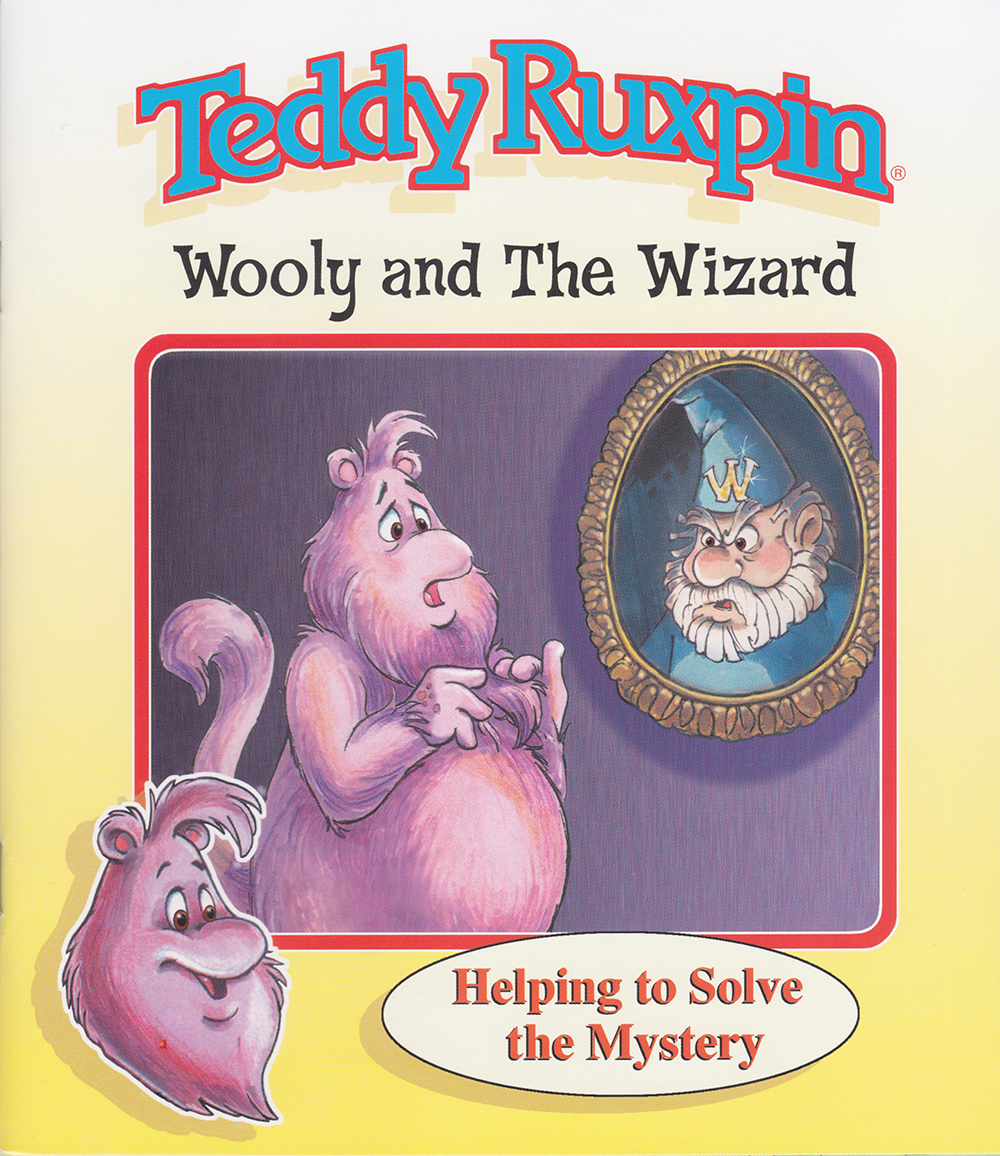 "Wooly and the Wizard"

Helping to Solve the Mystery

...we were ready to do anything to find Princess Aruzia.

“Wooly and the Wizard” is a story from the World of Teddy Ruxpin Adventure Series and is a re-imagining of parts of the 1985 story “The Missing Princess”. It was released for the BackPack Toys Teddy Ruxpin talking toy.

The story expands the original version of “The Missing Princess” to include elements of the 1985 “The Adventures of Teddy Ruxpin” ABC Live Action Special. It uses soundbites from that production to expand the narrative regarding the search for the Treasure of Grundo and Tweeg’s efforts to foil that plan.

Like every entry in the BackPack Toys series, two books were issued for “Wooly and the Wizard”: one picture book and one containing the entire text of the story. The picture book is noted for not only using some of the original art of the 1985 edition of “The Missing Princess”, but also updated many of its character models to conform more closely to their later renditions, such as Grubby’s appearance becoming more rounded and less angular and bug-like. Meanwhile, several pages of brand new art were created to accompany the expanded narrative.

After escaping the Mudblup caves and vowing to help Prince Arin find his kidnapped sister, Teddy and his friends fly the Airship in search of clues. They run out of water and land near a waterfall where they encounter the Wooly What’s-It. At first confrontational, Wooly softens at their story and agrees to help them find the Wizard of Grundo who may be able to help them. Meanwhile, Tweeg and L.B. encounter their own problems in search of the Treasure of Grundo. Upon their arrival, the Wizard reveals to our heroes that Princess Aruzia is being held in the Treacherous Mountains in the Hard-to-Find City by the evil Gutang warriors. Together, the crew makes ready to fly to the City and rescue Princess Aruzia.

The voice of Leota the Woodsprite introduces the title of the story before Teddy begins to sing (“Come Dream With Me Tonight” (Introduction)).

Teddy briefly recalls he and Grubby’s encounter with Newton Gimmick and their flight aboard the Airship as they searched for the Treasure of Grundo. He then explains that they’d been captured by the Mudblups where they’d met Prince Arin who had been searching for his kidnapped sister, Princess Aruzia. After escaping the Mudblups, Teddy and his friends decided to abandon their search for the treasure and instead pledged to help Arin find his lost sister.

Now they were running out of water aboard the Airship and land near a waterfall.

The group is startled to find a large, furry creature under the falls taking a shower. Grubby insists they need to get to the water. Teddy tries to politely ask the creature to move, but it only barks in response for them to go away. Grubby steals his courage and demands the creature move, explaining that he is holding up a quest to rescue a kidnapped princess. At this, the creature becomes much more docile and insists that the group should talk to the Wizard to see if he has any clues to where the princess might be.

Meanwhile, Tweeg and L.B. aren’t having much success in their quest to find the treasure and begin to blame one another for constantly getting lost.

The Wooly What’s-It proves to be too big and heavy to fit in the Airship, so Teddy and his friends follow him through the jungle as they make their way to the Wizard’s Fortress. Once they arrive, the Wizard is startled at the sight of Wooly on his stoop and insists Wooly stay outside while the rest come in.

The Wizard invites his guests to sit around a large, round table while he moves behind a curtain. On the other side, the Wizard addresses Louie: the same man who had blinded the Mudblups with his camera in the caves of the Great Desert! The Wizard asks Louie if he has any footage of a missing princess, and Louie claims he does. He readies the film for exhibition while the Wizard returns to his guests at the table.

The Wizard calls for everyone to concentrate on where Princess Aruzia could be.

As the group meditates on the question, a peg on the table begins moving, pointing one at a time to certain letters painted into the table’s concave surface.

The Wizard explains that Princess Aruzia is being held by the evil Gutangs whose fortress is the Hard-to-Find City high in the Treacherous Mountains. Grubby immediately recognizes this as the location of the treasure they’ve been searching for, but Teddy quickly shushes him. The Gutangs are armed with many weapons and flying machines, so it will not be easy to rescue the princess.

The Wizard gestures to a large glass mirror near the table and suddenly it begins to project pictures of the Hard-to-Find City, the Gutangs, and even Princess Aruzia.

The group thanks the Wizard for his help, but the Wizard warns them that nobody has ever been able to scale the Treacherous Mountains.

Wooly wants to help save the princess, but he’s far too big to fit in the Airship, and so they bid him farewell.

Meanwhile, Tweeg and L.B. have found their way to the foot of the Treacherous Mountains, but they are indeed proving much too difficult to climb, much to Tweeg’s frustration.

The story ends with Teddy and his friends setting sail for the Treacherous Mountains and ready to rescue Princess Aruzia (“Come Dream With Me Tonight” (Excerpt)).