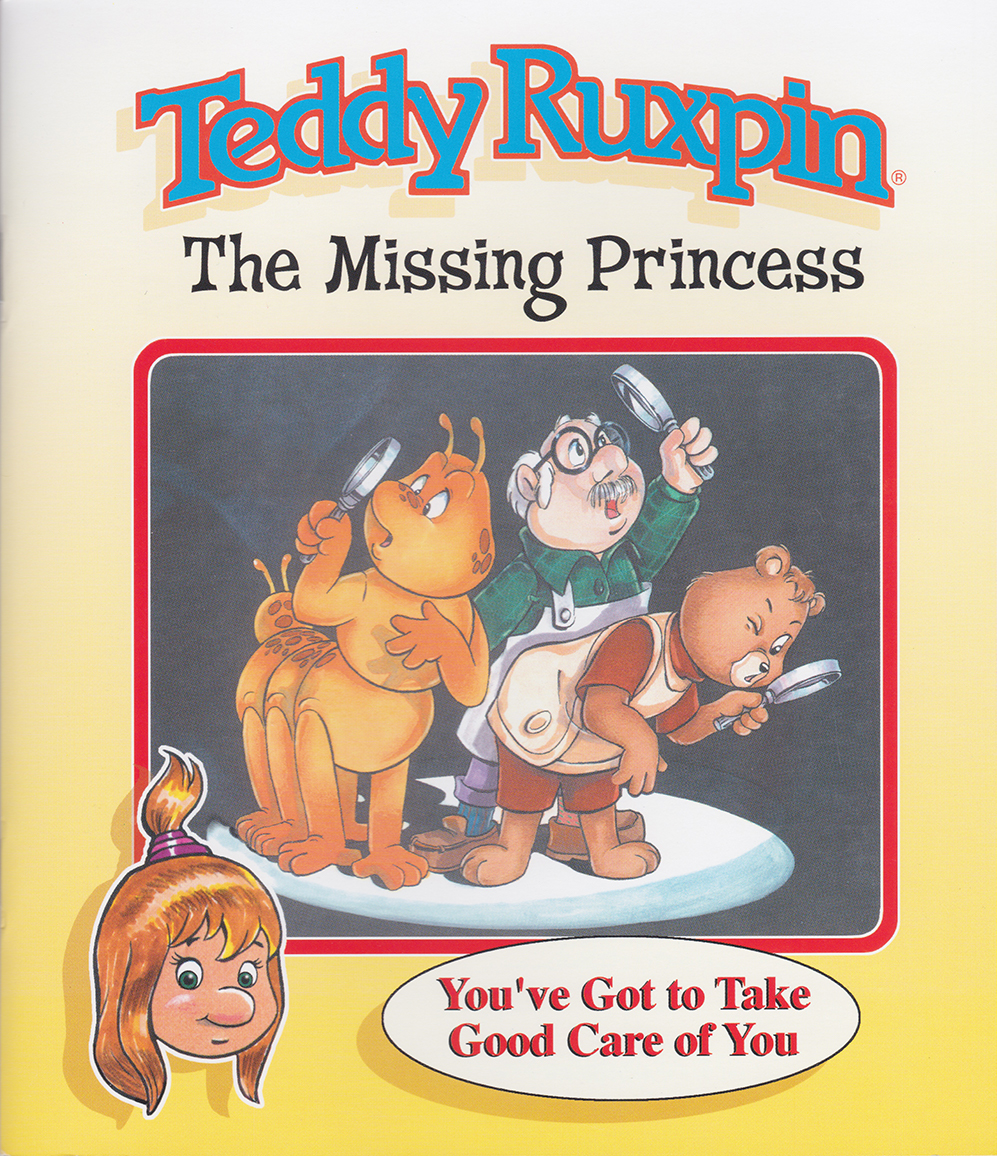 You've Got to Take Good Care of You

I never once gave up hope.

The story expands the original version of “The Missing Princess” to include elements of the 1985 “The Adventures of Teddy Ruxpin” ABC Live Action Special. It uses soundbites from that production to expand the narrative regarding the search for the Treasure of Grundo and Tweeg’s efforts to foil that plan.

Like every entry in the BackPack Toys series, two books were issued for “The Missing Princess”: one picture book and one containing the entire text of the story. The picture book is noted for not only using some of the original art of the 1985 edition of “The Missing Princess”, but also updated many of its character models to conform more closely to their later renditions, such as Grubby’s appearance becoming more rounded and less angular and bug-like. Meanwhile, several pages of brand new art were created to accompany the expanded narrative.

Having learned from the Wizard that Princess Aruzia is being held by the Gutangs in the Hard-to-Find City high in the Treacherous Mountains, Teddy and his friends prepare to rescue her. Meanwhile, Tweeg and L.B. sneak aboard the Airship to gain entry to the Hard-to-Find City. As night falls, Teddy, Grubby, Gimmick, and Prince Arin sneak through the City disguised as Gutangs and manage to find Princess Aruzia at last. They’re only problem now is getting out of the City before they’re discovered.

The voice of Leota the Woodsprite introduces the title of the story before Teddy begins to sing (“Come Dream With Me Tonight” (Introduction)).

Teddy briefly recalls he and Grubby’s encounter with Newton Gimmick and their flight aboard the Airship as they searched for the Treasure of Grundo. He describes meeting Leota and how she helped them fix the steering problems with the AIrship. Teddy then recalls how they’d been captured by the Mudblups where they’d met Prince Arin who had been searching for his kidnapped sister, Princess Aruzia. After escaping the Mudblups, Teddy and his friends decided to abandon their search for the treasure and instead pledged to help Arin find his lost sister. They then met the Wooly What’s-It who took them to see the Wizard. The Wizard explained to them that Princess Aruzia was being held in the Hard-to-Find City atop the Treacherous Mountains by the evil Gutangs. That just so happens to be where the Treasure of Grundo is supposed to be hidden.

The Airship arrives at the Treacherous Mountains, and the group lands at the foot of the mountains so they can devise a plan to rescue Princess Aruzia.

Meanwhile, Tweeg is still wallowing in his misery, convinced he will never be able to scale the mountains. Suddenly, he spots the Airship, and Tweeg moans in a fresh wave of despair as he realizes Gimmick is about to get to the treasure before him. L.B. notices that the Airship is landing, and that’s when Tweeg suddenly gets a new idea.

As they plan their rescue mission, Teddy and Princes Arin make slingshots while Grubby whips up another batch of Root Stew. As night falls, the crew prepares to cast off and Tweeg and L.B. sneak aboard the Airship. Together, they all fly up to the top of the Treacherous Mountains (“Wishing”).

The Airship lands near the Hard-to-Find City. Teddy, Grubby, Gimmick and Prince Arin sneak into the City, and once they’re out of sight, Tweeg and L.B. sneak in themselves, hoping to find the treasure.

The four heroes sneak through the City. As they encounter Gutang guards, they overpower them and steal each guard’s helmet and armor. They disguise themselves in the armor and continue through the City and eventually locate the guardhouse.

Disguised as Gutangs, the four walk right past several other guards and eventually find themselves in the room where Princess Aruzia has been locked in a cage. They group overpowers the remaining guards and remove their helmets. Princess Aruzia is overjoyed at being reunited with her brother.

Disguising Princess Aruzia in another helmet, the five make their way out of the guardhouse and back toward the Airship (Wishing).