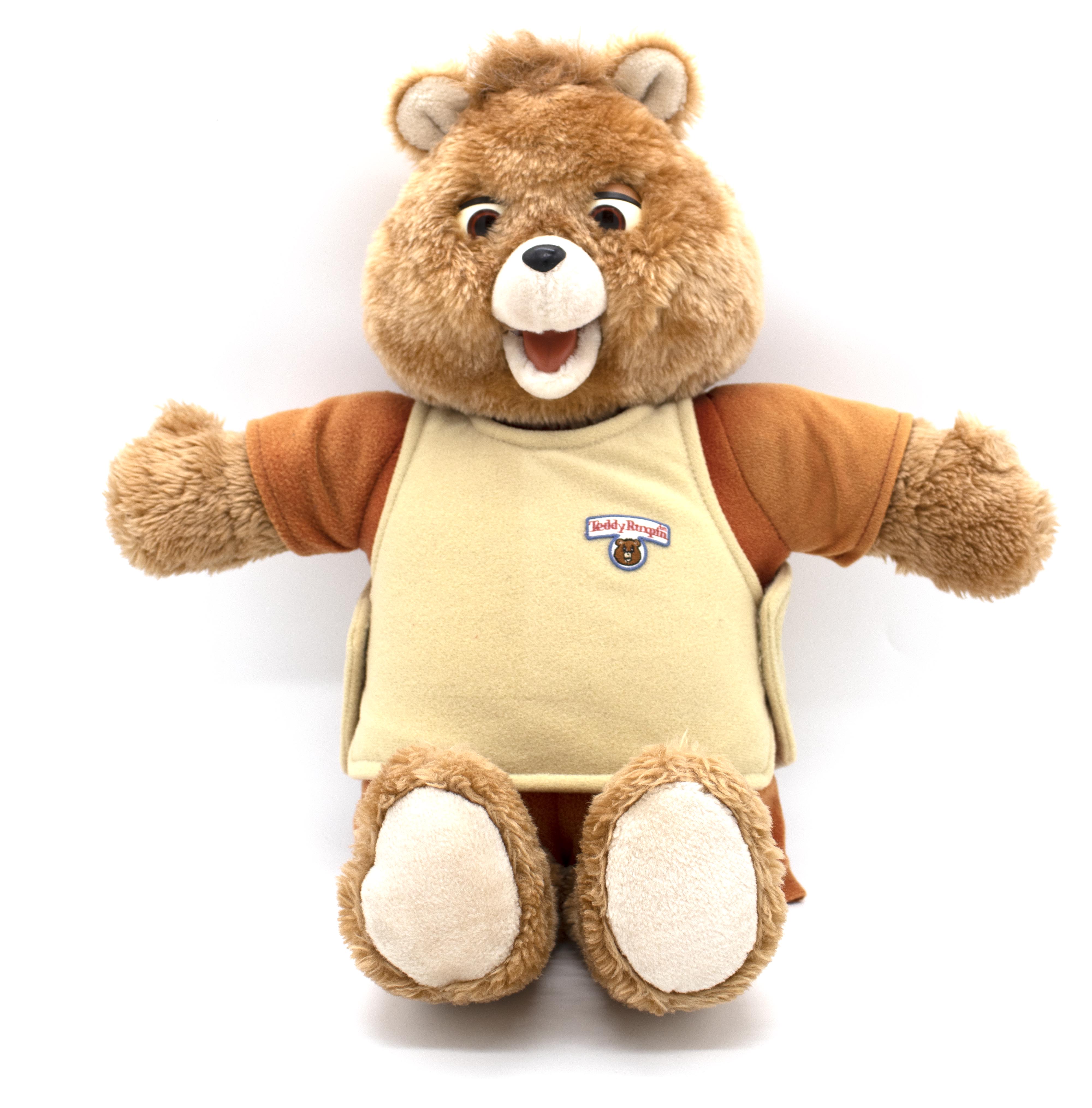 Here is where you'll find everything you've ever wanted to know about The World of Teddy Ruxpin and his visionary creator, Ken Forsse!

Debuting as the world's first animated talking toy in 1985, Teddy Ruxpin and his friends have captivated the imaginations of young and old for over 30 years!

From audio cassettes, to print, to television, Teddy's stories continue to inspire new adventures, music, art, and freindship the world over.

Join us as we celebrate the World of Teddy Ruxpin, and pay tribute to the man behind Grundo's foundation: Ken Forsse!

All are welcome at Grundo Gazette!

New stories have been added to the Adventure Series page!

The following stories have been added:

In addition, a list of locations and compatible Teddy Ruxpin talking toys have been added to each story's page.

We Met An Alchemist!

Check out our BRAND NEW VIDEO on YouTube about the time Billy Tooma and I met original Alchemist Linda Pierson and interviewed her for "Ken Forsse: Come Dream With Me Tonight"!

Make sure to watch til the end for a look at the newest and most cherished addition to my collection!

Six more story synopses have been added to the Adventure Series page!

The following stories have been added:

As first announced on filmmaker Billy Tooma's Instagram, here is the new poster for "Ken Forsse: Come Dream With Me Tonight"! Like the original poster, which was bordered by Grundo foliage recreated by artist Najee R. Smith. Yet while the original poster used a likeness of Ken rendered by Najee and featured Teddy Ruxpin perched on Ken's left shoulder, this new poster features a photo of Ken with Teddy on the set of the 1985 live-action ABC Special, "The Adventures of Teddy Ruxpin", provided by original Alchemy II employee and Teddy Ruxpin designer Linda Pierson! The names of those who have been interviewed for the film are featured below, though you can find a full list on the official Icon Independent Films website.

The poster has been added to Grundo Gazette's Ken Forsse page as well! 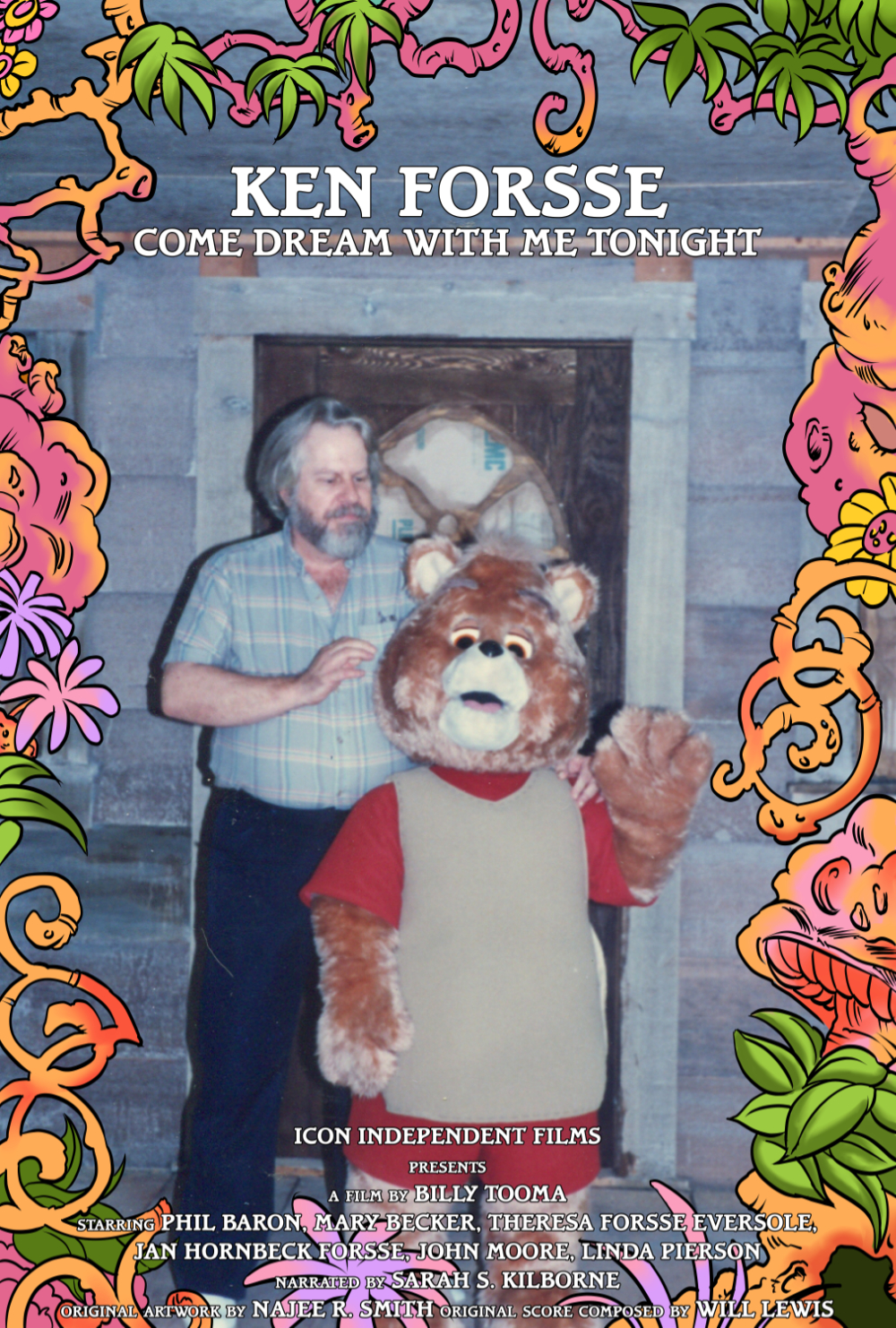 How to Watch Teddy Ruxpin For FREE!

There is a new video on Grundo Gazette's YouTube channel showing step-by-step instructions on how you can setup a Roku account and get started watching "The Adventures of Teddy Ruxpin" on Roku Channel COMPLETELY FREE!

Check out the video and start your journey in Grundo today! 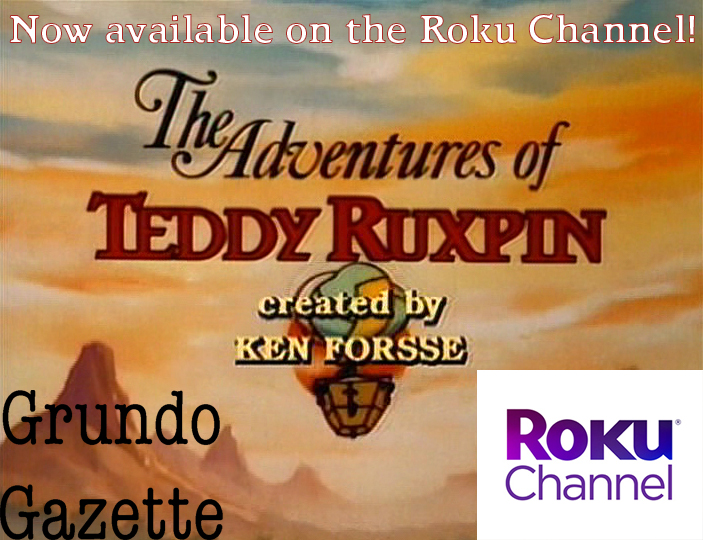 "The Adventures of Teddy Ruxpin" is now available for free on the Roku Channel!

All 65 episodes of the classic 1987 animated series can now be viewed for free by anyone with a free Roku account!

While Amazon Prime Video has recently released the series on their service, it required a Prime Membership subscription or an outright purchase of the series, leaving anyone who may not have been able to spend the money in the dark.

A Roku account can be created for free and the episodes can be watched in virtually any web browser. Most importantly, you do not need to own a Roku device to get access to the Roku channel.

This is your best chance to enjoy the most complete version of Teddy Ruxpin's story, and it's absolutely free!

The stories that have been added are:

Come back soon as more stories are be added!

Documentarian Billy Tooma has released a brand new teaser trailer for his forthcoming film, "Ken Forsse: Come Dream With Me Tonight" featuring never-before-seen photos from the people at Alchemy II responsible for bringing Ken's vision for Teddy Ruxpin to life! Check out the full trailer below and don't forget to follow Billy on Instagram for all the latest news and updates!

Grundo Gazette's exclusive interview with filmmaker Billy Tooma is now LIVE on our YouTube channel! Billy tells us what inspired his career as a documentarian, his childhood as a fan of Teddy Ruxpin, and the challenges of bringing the untold life story of Ken Forsse to the mainstream!

Do YOU have a question for filmmaker Billy Tooma about his upcoming documentary "Ken Forsse: Come Dream With Me Tonight"? Email your questions to vincentconroy@grundogazette.com and we’ll be sure to ask him when he sits down for our upcoming interview!

Everyone's favorite Illiop has made a surprise appearance in this year's Nissan holiday commercial! The commercial, entitled "Christmas Through the Years", takes a look back at some of the most popular gifts of the last 30 years. You'll have to be paying close attention to catch him, but it may just hit home for anyone who received their first Teddy Ruxpin for the holidays as a child! Check out the full video below!

A special holiday message from Grundo Gazette! Thanks to everyone for supporting the community! Have a safe and happy holiday, adn we will see you in 2020!

What else would you like to see us explore in the World of Teddy Ruxpin? Let us know!

Billy Tooma, director of the upcoming documentary "Ken Forsse: Come Dream With Me Tonight" has announced today that principal research for his film is now complete!

In the last year, Billy has conducted over 40 interviews with Mr. Forsse's family, friends, colleagues, and peers and acquired more than 1,000 visual elements for the film spanning Forsse's entire career, including several hours of archival footage.

While this marks the end of principal research, the film itself is still far from ready for release. Billy will spend the next two years conducting final bits of research, conducting a few final interviews, and constructing a cohesive narrative for the film.

As previously announced, the film is slated for a Fall 2021 release. You can learn more about the film and its production over on the Ken Forsse Page and on the Icon Independent Films Official Website.

Our forums recently suffered a spam attack in which several dozen fake accounts were created and flooded the platform with ads and other non-genuine posts.

To ensure this doesn’t happen again, anyone creating a new user account at GrundoGazette.com/forum will need to first verify their account via an emailed link before they are able to post to the forum.

You can still read the forums without creating an account. If you already have an account, you do not need to take any further action.

Please reach out with any questions or concerns. We apologize for any inconvenience to our community.

Just in time for Halloween, community member and Grundo Gazette contributor IlliopOctopede has posted a brand new and delightfully spooky video! Through some technical wizardy, Worlds of Wonder Snoopy and a homemade (yes, homemade!) talking Charlie Brown, complete with a ghostly disguise, regale us with the ballad of the Great Pumpkin!

Be sure to subscribe to IlliopOctopede on YouTube for more great videos featuring some of your favorite Words of Wonder talkers (and singers!)

The Frequently Asked Questions page has been updated with a few of the most common questions fans have asked! Check back often to see if your question has been added here!

Our Forums Have a New Look!

Our forums have a brand new look! Thanks to Eleanor Jacobson (themissingprincess) for taking the time to give our forums a new theme to match the look of the website! Be sure to drop her a line of thanks the next time you check in there!

We've also added an Adventure Series page to help people discover which stories are available for their version of Teddy Ruxpin talking toy. We'll be adding story synopses in the near future!

"The Adventures of Teddy Ruxpin" Comes to Amazon Prime Video! 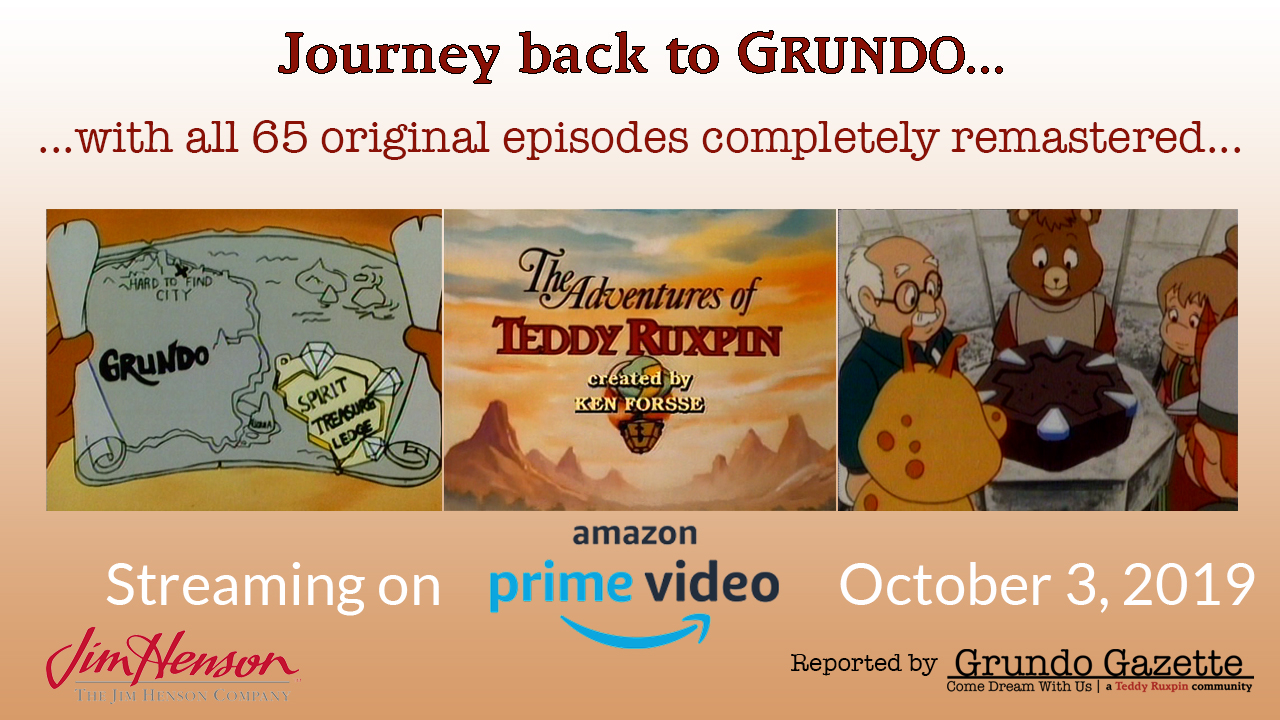 All 65 episodes of the original series, which originally ran from 1987-1988, is now available to stream on virtually any device capable of accessing Amazon Prime Video! Those without a Prime Membership can purchase the episodes for $0.99 each, or the nab the entire series for $53.99.

In addition to making the series available to an entirely new generation of fans, the episodes themselves have been compeletely remastered from the original master tapes so they can be presented at the highest possible quality for the age of high definition!

Head on over to "The Adventures of Teddy Ruxpin" on Amazon Prime Video and take a journey back to Grundo!

A special message from "Vilicles" Vincent Conroy: the Editor-in-Chief of Grundo Gazette!

We've updated the site so that the proper fonts are displayed across different browsers! The site's headlines, quotes, and logo use American Typewriter: the same font used on and in the Teddy Ruxpin Adventure Series books!

We've also fixed the site so that pages fill the entire window, eliminating instances of white space. We will be working on making sure the site is scaled properly for mobile platforms in the near future!

We've also fixed an issue that prevented newly registered forum users from viewing or contributing. Thanks to Enzo for the heads-up!

We have some exciting stuff coming in the very near future, so be sure to check back often for new content and news!

The Trio Welcomes You to Grundo Gazette!

We have a new image to welcome you to the Grundo Gazette! Many thanks to our artist, Najee R. Smith for the new Grundo Gazette banner!

Have You Joined the Grundo Gazette Fan Forum?

The Grundo Gazette Fan Forum is live! Create a free account and join the conversation by clicking the in the navigation bar at the top of each page!

We can't wait to hear from you!

Tweaks ("It's TWEEG!") and Changes

Open the book to Page One...

Grundo Gazette is officially online! We hope this website will provide a platform for fans all over the world to learn and share their love of Teddy Ruxpin, his creator Ken Forsse, and everything in between!

We've worked hard to provide a place where fans can interact on every major social frontier the internet has to offer. From Instagram and Twitter to YouTube and Facebook, and even our own Fan Forums, Grundo Gazette has something for everyone!

The site is small to start, but new content will be added every month, so check back often! And if you don't see something you're looking for, let us know by contacting us and letting us know!

Welcome everyone to Grundo Gazette!

Make sure to check out our fan forum by clicking the icon in the navigation bar at the top of each page!

In addition to the upcoming reboot series, Henson Independent Properties has announced they are in the process of remastering the once-thought-lost master tapes for the original "The Adventures of Teddy Ruxpin" animated series!